Crocodiles are one of the largest and strongest reptiles that dwell amphibian life (underwater gill-breathers). Reptiles are those animals that are cold-blooded and their skin is mostly scaly. Since they have gills, they can live underwater and on the land. They are very agile creatures (fast-moving) and their speed ranges from 24 to 32 km/h both on the land and underwater.

Crocodiles are well-known for their attacking behavior for catching the targeted prey that includes animals and even humans. They are very sensitive to ripples and other movements in the water and possess a strong sense of their environment. They are also famous for opening their one eye during sleep. They belong to the family Crocodylidae and the class Reptilia. The average lifespan of their various species is between 70 to 100 years. 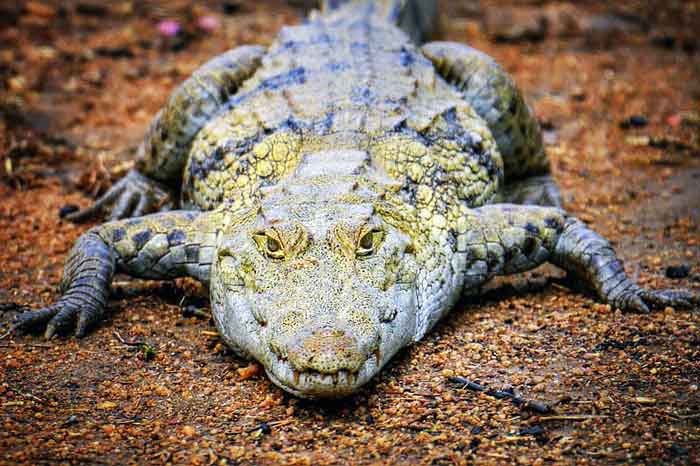 Crocodiles, in their overall look, are similar in shape with common household lizards. They have a long face and a larger mouth that also shows their teeth even in a closed position. The irregular parts in their jaw have mostly cone-shaped teeth, which get replaced naturally over time. Moreover, the tongue in their mouth is thick and lacks normal movements.

The rear side of their head is flat and is attached to their short and fatty neck. Furthermore, their head contains small and close nostrils, bulging eyes with vertical-slit pupils, and ear-holes at higher positions. Due to this reason, their eyes, nostrils, and ears-holes remain outside of water while they submerged in water. However, before submerging they cover their exposed organs with flaps of a protective membrane.

They have short but stronger legs each having a foot that contains five toes. Their feet are webbed that help them in taking quick maneuvers underwater. They have different types of scales over their entire body and a strong tail that helps them in swimming. Although many people consider them as mega lizards, they are different from lizards.

Crocodiles are found on almost every part of the earth; except Antarctica and Europe. They like places near-tropical areas because they prefer tropical climates, for example, jungles and marshlands. The warm temperatures and humid air are well suited to them. Also, they enjoy relaxing under direct sunlight.

Crocodiles have special adaptions that allow them to live in freshwater and the salty waters. Saltwater crocodiles can inhabit open oceans and they can swim across other water bodies in search of finding new habitats. This behavior enables them to spread over vast areas around the world.

In the case of insufficient water, the American crocodiles are known to making holes and tunnels that provide them a good shelter. The smaller species of the crocodiles, such as the Morelet’s crocodile, prefer building floating nests for their eggs for protection purposes. Whereas, many other species choose higher places on land for building a nest for their eggs.

Crocodiles are among the very good predators with attacking behavior. They eat almost all kinds of reptiles, fish, birds, and a variety of other animals including snakes, cows, dogs, kangaroos, and sharks, etc. Many times they even attack humans that come closer to them and may eat them too. They can even go on to hunt larger mammals such as hippopotamus, rhinoceros, and elephants. They also eat the dead flesh to their full extent. However, even the largest size Australian crocodiles won’t attack whales perhaps due to the extra-large size of whales.

Saltwater crocodiles consume different mammals, birds, or fish. They are able to hunt prey larger in size than their own size. They eat almost anything that can provide the meat or flesh and it comes to their way. 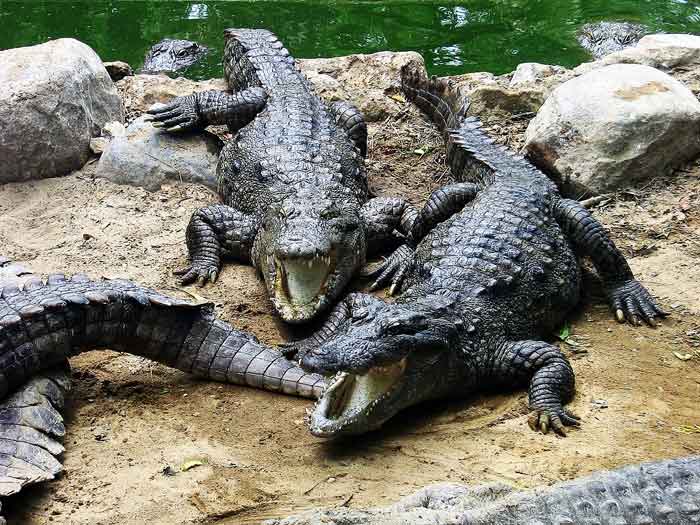 Crocodiles show simultaneously both inactive and agile behavior. Because they are always on alert – even during their sleep. They may live in groups where they take care of younger and newly born members. However, their males may become hostile or aggressive towards other males during the mating season.

Crocodiles can live long periods of time without food. They cannot be strictly defined as nocturnal (night-time active) or diurnal (daytime active) animals. They are very stealthy creatures which help them in efficiently catching their prey without being detected.

Difference Between Crocodiles and Alligators

Generally, many people find it difficult to tell a difference between a crocodile and an alligator. Because both of them look very similar to each other. But, crocodiles and alligators are different from each other in many aspects.

The snout of crocodiles is more elongated pointy, whereas, alligators have broader snouts. The majority of alligators are localized to the US and China. Whereas, crocodiles are found in almost every country. Crocodiles, in general, mostly live in salty water, but alligators prefer to live in freshwater and swamps.

The teeth of crocodiles are much longer and are visible even when their mouths are closed. But in the case of alligators, teeth may not be visible outside of their mouth. Moreover, the size of an average crocodile is usually larger than that of alligators.

Furthermore, Crocodiles have lighter skin colors, but alligators can also have darker colors. Alligators are usually faster than crocodiles during movements on land or underwater. And according to behavior, crocodiles are more aggressive than alligators.

Until the 1970s, according to the U.S. Fish and Wildlife, the species of the American crocodiles were considered as endangered. However, from 2007 onwards they are considered as threatened species (fewer chances of being extinct). It was possible due to the bans on hunting and selling of crocodiles for increasing their population. But, many human activities are still destroying their habitats. As a result, they are seen wandering in public places like parks or playgrounds, and underground in the drainage network.