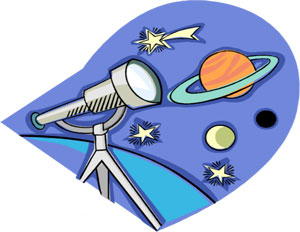 The sky, in a clear night, is full of illuminating dots and has always been a subject of study since ancient times. Previously, people related the motion of objects in the sky to major events and affairs on the Earth. This field of study was called astrology, but today we learn about the sky and space objects in a scientific way. Today the study of planets, Sun, moons, stars, galaxies, asteroids, comets, black holes, and other celestial objects is called astronomy.

Did you know? Galileo Galilei was the first person to study space objects with his own invented telescope.

Did you know? The first human to form the image of a solar eclipse was Ibn al-Haytham (Alhazen). He formed the image with the help of his invented device, called the pinhole camera.