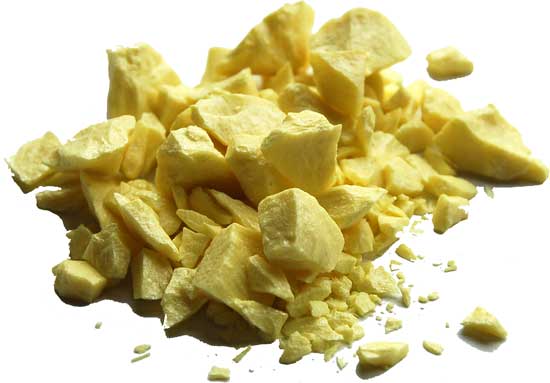 Sulfur (also spelled as Sulphur) is a chemical element in the periodic table having the atomic number of 16. It is mostly known for causing very bad smells, but in reality, the pure sulfur is odorless nonmetal element. The smells that irritate us are actually the compounds of sulfur, e.g. Hydrogen Sulfide smells like rotten eggs.

Sulfur is a widely used element across the world. Some of its uses are:

Sulfur is the 10th most abundant element in the universe, and 17th most abundant in Earth’s crust. Sulfur is found in many places around the world. The places where the sulfur is likely found are volcanic sites, natural geysers, hydro-thermal vents, and hot water springs. Sulfur is found in both pure forms and in minerals. Some minerals of sulfur are pyrite, barite, and gypsum.

The largest sulfur producing country is China. Other countries that also produce sulfur are US, Canada, and Russia.

Sulfur is available in its pure form in nature, so ancient people had known about the sulfur. Chinese had known the reactivity and uses of sulfur in medicines and black gunpowder.  They used black gunpowder in fireworks. Sulfur was considered as a compound rather than an element. It was proved by Antoine Lavoisier in 1777 that sulfur is an element.