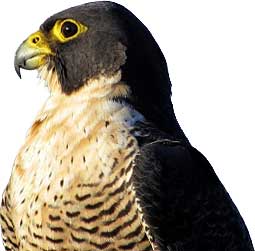 Peregrine Falcons are famous for their very fast flying speed and are considered world’s fastest birds. Peregrine falcons are the large birds and their size is comparable to crow. They have strong sharp talons of yellow color.

They are predatory birds (raptors), that is, they feed upon other birds and bats which they capture – even during flight. They can fly and dive during a flight at great speeds – reaching up to a speed of 186 miles/hour (300 km/h) an hour in diving. They belong to genus Falco, which includes about 40 species and their biological name is Falco peregrinus. 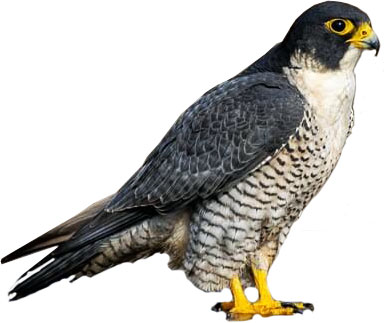 They look like other falcons and eagles, however, they have some typical characteristics which help us to distinguish them from other falcons. They have blue-grey back, barred white under-parts, and their heads are of black color. Many times it becomes difficult to identify them as they have surprisingly high speeds during flight. They are also capable of camouflage coloring. Their wings and tail have bluish-gray color.

Peregrine Falcons have cheeks marked with dark brown tear-shaped marks. Their chin and neck are white, both eyes are surrounded by yellow circles, and the chests have Dark-brown bars. In case the wings are open, dark brown bars across the wings may be seen. The height of the Peregrine falcons goes up to 1.5 feet or 0.4 meters. Their wingspan is around 3.5 feet or one meter. 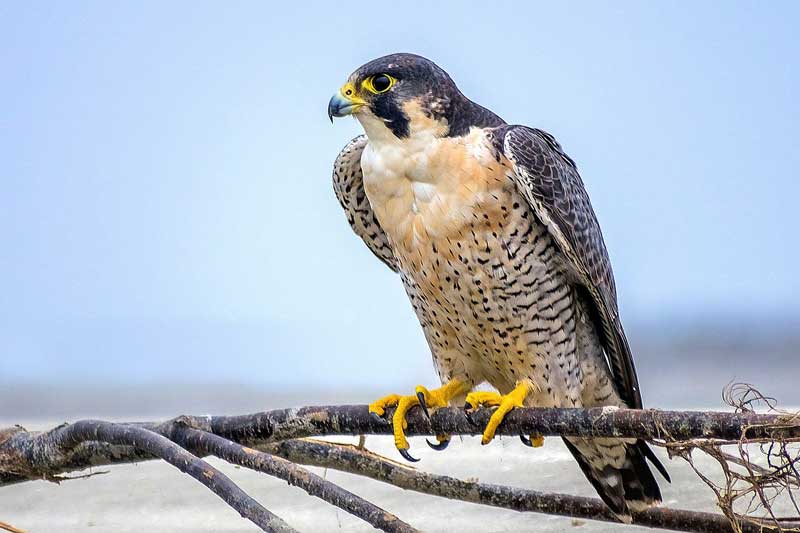 Peregrine Falcons are one of the abundantly found birds that distributed across all the continents of the world – except Antarctica continent. They choose wide and open spaces for living, and flourish near coastal areas. But they can be also be found from tundra to desert areas. Moreover, Falcons are even known to live on bridges and high-rise buildings of major cities.

Peregrine falcons are capable of surviving a number of habitats having different characteristics. They can be found in urban environments, such as, living on bridges and high-rise buildings of major cities, mountains, cliff sides, river valleys, and coastal areas. They exhibit migrating patterns as well. Mostly they migrate during winter season to comparatively agreeable climates. But many of them do not migrate from their areas.

Diet – What Do They Eat?

Peregrine Falcons mostly feed themselves on other birds. They eat a wide variety of species; nearly 450 North American species have been recorded as their prey. The number of prey that they can hunt are as many as 2,000 birds around the world. They capture and eat birds as large as sand-hill cranes and as small as hummingbirds. Typically they consume shorebirds, grebes, ducks, gulls, songbirds and pigeons. In addition to a variety of birds, they also eat bats and occasionally they confront with other hunters for seeking prey.

Peregrine Falcons, during most of the 20th century, were getting locally extinct in the USA and Canada. Because the farmers were spraying pesticides, especially the DDT on their crops, which polluted food-chain. Being top predators, they consumed such chemicals by eating their prey, which includes fish and birds. As a result of chemical changes, they were dying off and their breeding was going unsuccessful. But recently, remedial steps have been taken and they are no more endangered species.