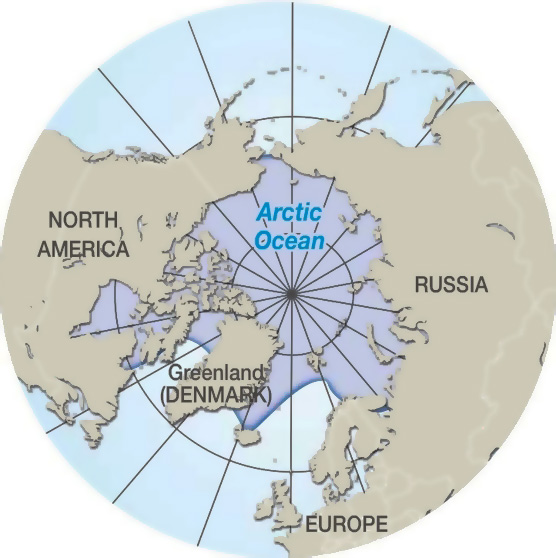 The Arctic Ocean is the smallest and most frozen Ocean on the Earth. It is entirely frozen in winter and melts partially in the summer months. Earth’s geographic and magnetic North Pole also lies in this Ocean. The Arctic Ocean’s name is derived from the Greek word “Arktos” which means bear. The reason for giving that name is because polar bears live in this region.

The Arctic Ocean is the coldest among the five major oceans and is completely frozen in the winter months. During the summer months, layers of ice melt down completely in some regions and ocean water becomes visible. Moreover, ice from the glaciers and ice shelves also shrinks in summer. The melting of ice makes the ocean surface texture darker which increases sunlight absorption.

The Arctic Ocean is the least saline ocean due to several reasons and its salinity also varies significantly according to the season. The main cause of lower salinity is lower evaporation and a high inflow of freshwater rivers from glaciers. The salinity becomes even low in summer due to the heavy melting of glaciers.

Who Lives on the Arctic Ocean?

The Arctic Ocean’s surface is frozen and consists of massive glaciers. There is a variety of animals that live on the surface of the Arctic Ocean and also underwater. Some of the famous animals are polar bears, walrus, Dall sheep, seals, moose, caribou, beluga whale, and arctic wolf.

In the past few decades, the Arctic Ocean’s glaciers have been continuously shrinking due to an increase in average temperature. As the ice shrink, more ocean water becomes visible which reduces the reflection of the surface. As a result, more and more heat is absorbed by the dark-colored ocean which further increases heat and sped-up the ice melting. This is called the run-away effect which is majorly caused by global warming.