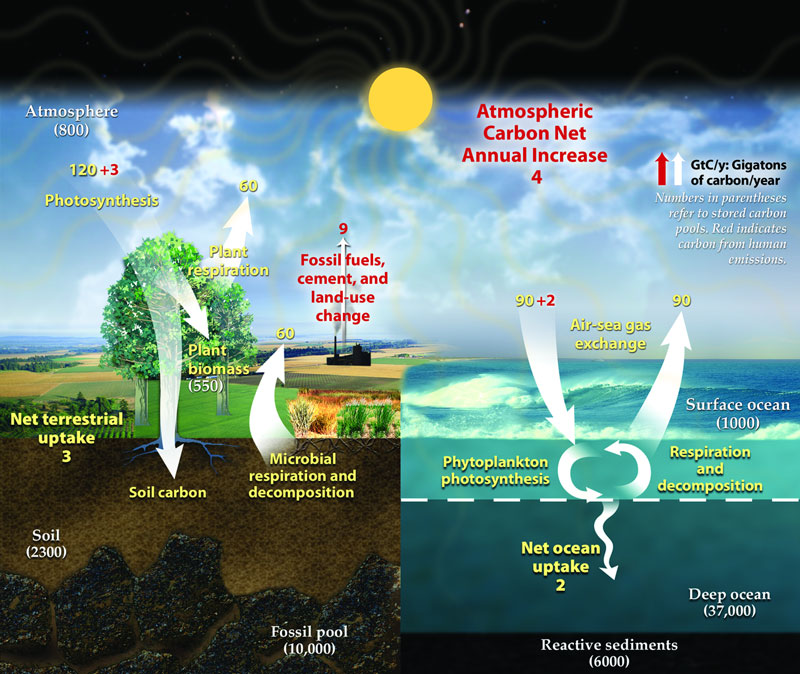 Carbon is the most useful element for living things and many geological processes. It is has been placed as the 19th most abundant element on our Earth’s crust. It is found in many materials, e.g. carbon dioxide, coal, living things, and lime, etc. The carbon moves across the Earth in a cycle called the carbon cycle.

What is the Carbon Cycle?

The carbon cycle is a process that happens continuously all around the Earth. In this cycle, the carbon moves between living things, land, water, and atmosphere in the form of various compounds. The carbon cycle is important in sustaining all kinds of living things on the Earth. For example, we humans breathe oxygen and exhale carbon dioxide to the atmosphere. Whereas, plants absorb that carbon dioxide from the atmosphere and gives oxygen gas.

How Carbon Moves In Carbon Cycle

There are various ways in which carbon moves across the Earth. Some methods supply carbon to atmosphere, land, water, and living things, whereas other methods take carbon from these things.

Carbon moves to the atmosphere, water, land, living things in several ways. Some of them are:

The processes in which carbon is taken out of the atmosphere, water, land, and animals are:

How Carbon Cycle Is Affected By Humans?

After the advent of successful engines in the 18th century, the consumption of fossil fuel has increased. Since then, the consumption has increased exponentially, which moved more carbon to the atmosphere than it is taken-out. As a result, the natural balance of the carbon cycle has been disturbed and it has also caused global warming. The other way in which humans affect the carbon cycle is by certain industrial processes that release carbon dioxide further in the atmosphere.

It is highly advisable to shift from inefficient and conventional methods of transportation and industrial operations to efficient and green methods. This way the impact on the carbon cycle can be reduced.

TopTenScience.com
We use cookies for the improvement of user experience. You are giving permission to use our cookies by using this site. Find out more.