Our Earth is surrounded by layers of gases. This layer of gases is called atmosphere. It helps us to breath oxygen, fly the airplanes, and enjoy the breeze of air.

Layers of the Atmosphere

Atmosphere extends up to 500 km in space from the ground. But, as we move up in the atmosphere its density and pressure will gradually decrease and temperature also changes.

We can’t go up in the atmosphere without any pressurized suit. Because, after few kilometers pressure decrease to a value where we can’t survive.

The atmosphere of the Earth is divided into five main layers according to the temperature. These layers are: 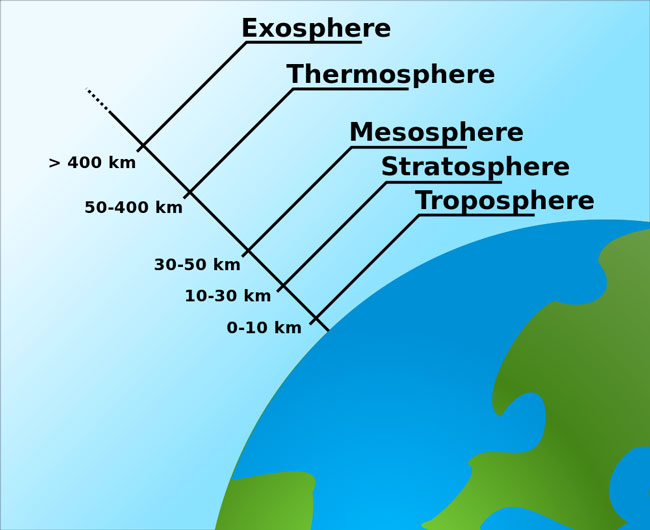 So, what do you think where space begins? Actually, the atmosphere is so diffused in the space that there is no any clear boundary between the atmosphere and space. But space is officially considered 50 to 80 miles from the ground.

How Atmosphere protects life on the Earth

Atmosphere covers our Earth like a blanket and insulates it from the space. It provides precious pressure on the ground so that we can live comfortably. Our atmosphere absorbs the heat from the Sun during the day and retains it for the night. As a result, our nights don’t get too cold.

The stratosphere in the atmosphere carries the ozone gas. This gas protects living things on from cancer-causing Ultraviolet rays from the Sun. Our atmosphere also absorbs the deadly radiations coming from the outer space. But, we as a human don’t respect the atmosphere very well. Humans have been polluting the atmosphere from centuries ago. See Air Pollution for further information.