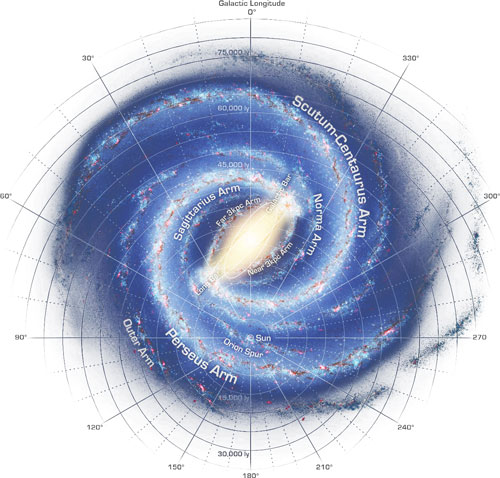 The Milky Way is a unique galaxy in a sense that it houses a solar system that contains life. Our Earth and the solar system are a very tiny part of the Milky Way. You can see the beauty of our galaxy in the night time by watching twinkling stars during a clear sky.

What Is The Milky Way?

The Milky Way is a galaxy among the billions of other galaxies in our Universe. It is a cluster of stars and other cosmic objects. It houses at least 250 billion stars excluding the other galactic objects. Most of the stars in the Milky Way also have their own solar system in which many planets and asteroids orbit around a star.

Structure Of The Milky Way

We, humans, are living inside the Milky Way galaxy which makes it harder to find its structure. Astronomers have used various tricks and methods to find out how our galaxy looks like. With the use of powerful telescopes, astronomers have found regions of younger stars and older stars. They have used this data along with computer simulation to find the structure of the Milky Way. The result of all the work indicated that our Milky Way is barred-spiral in shape.

Furthermore, the Milky Way has 2 major arms and 2 minor arms that start from a bar shape at its center. Most of the stars are found in the major arms, while the minor arms mostly have dust which is a suitable place for the formation of new stars.

Objects In The Milky Way

Other than these objects, the Milky Way is full of dust and gas clouds that are distributed in the empty spaces between the objects. The cloud of dust and gas is estimated to be a few hundred light-years in the thickness.