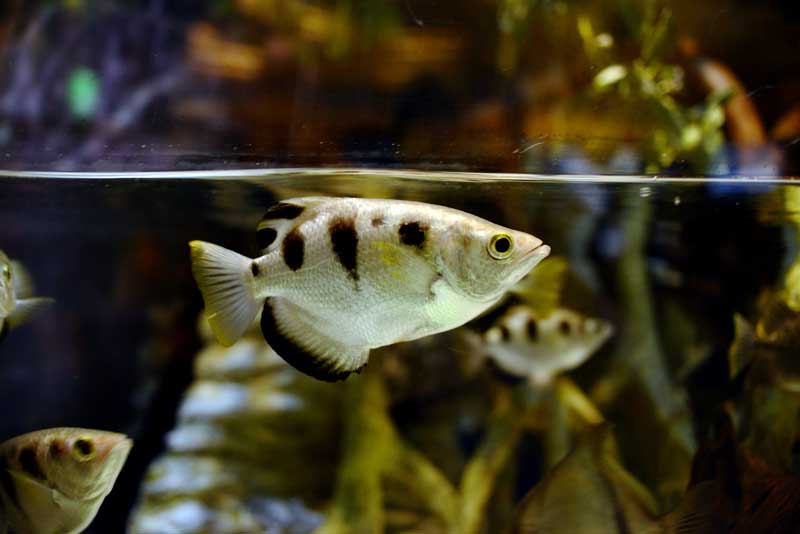 Archerfish is also called a spinner fish and pistol fish. They are famous for capturing land insects or other small animals by a mechanism of shooting a powerful stream of tiny water droplets from their mouth. Thus, they are predators.

They belong to genus Toxotes which in total contains 10 species. They are found in India, Sri Lanka, Southeast Asia, and Northern parts of Australia. They are small-sized ranging from 12 to 18 cm but some varieties of them can go up to 40 cm.

The bodies of archerfish are quite deep and look like they are compressed sideways. Also, their bodies are very much elongated. They can protrude or extend their mouth and their lower jaw can be also be extended.

At the time of shooting the water-jet, they are able to change the shape of their mouth accordingly. The dorsal fins are located near its rear side. Their vertebrae consist of four pieces which also encases their spinal cord. They have large movable eyes that are set in a forwarding position. The moveable eyes help archerfish to locate its prey and make accurate judgments about the surrounding environment.

Diet – What Do They Eat?

The major diet of archerfish is living insects; both land and water insects. They also eat mealworms and dried planktons. They are also interested to eat underwater prey, for instance, small fish, crustaceans (shrimps), and other small animals, e.g. spiders, small lizards.

In addition to that, flower buds and fruits of terrestrial plants may also be eaten by archerfish. Small archerfish don’t consume any vegetative material. Their diet also varies with their location where they inhabit. 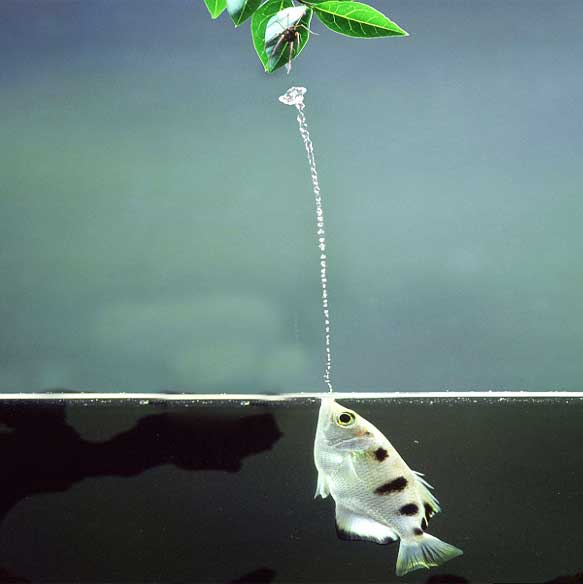 Archerfish are surprisingly accurate aimers and shooters. Three species of archerfish, Toxotes blythii, Toxotes chatareus, and Toxotes jaculatrix, have been tested for accuracy. Generally, all of them are presumed to be accurate shooters. They target their prey from various angles.

After selecting the prey, its eyes are rotated in a manner that the image of the prey is generated at a specific location of the retina in their eyes. Then, the stream of water is strongly shot at the prey with great accuracy. They exhibit consistency in re-attempting if they fail in the first attempt. But such failures are rare.

Archerfish may leap above the surface of the water to catch their prey whenever such an action is possible. Many of the archerfish stay closer to the water surface. According to recent research, they are experts at catching underwater prey as well, for example, the prey living in silt (a granular material).

Archerfish are also experts in learning. Their sequence of learning aerial and submerged water shooting was unknown. It was found that their techniques of aerial and sub-merged shooting are dependent on one another. Moreover, they are remarkably experts at hydrodynamics. 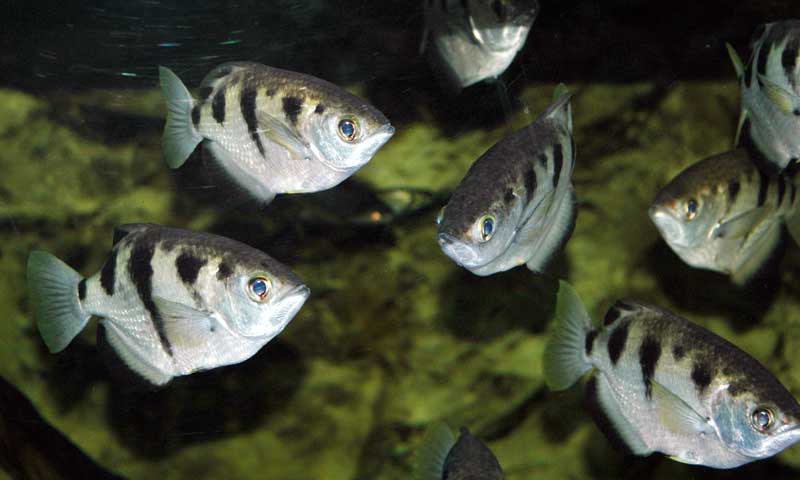 Archerfish typically prefer coastal saltish mangrove vegetation at river mouths as their habitat.  However, in addition to brackish waters, they can dwell in freshwater as well. Depending on their feeding patterns, they prefer shallow and murky waters. For the purpose of breeding, they prefer mangrove swamps. People have tried to keep them in an aquarium but they appear more to be freedom lovers.