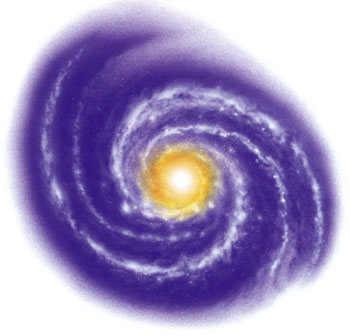 During the night time in a clear sky, you can see a lot of stars scattered all around. Most of the stars that you can see belong to our own galaxy called “Milky Way”. There are many other galaxies that are distributed throughout the universe. You can watch some galaxies clearly with the help of a hobbyist telescope, the other galaxies can be seen with large astronomical telescopes.

What is a Galaxy?

Galaxies are the home of stars and other cosmic objects. You can simply consider them as a cluster of stars, planets, asteroids, dust particles, black holes, and dark matter. All the members of a galaxy are held together by gravitational force – much like planets around the Sun. An average-sized galaxy has around a few hundred billion stars; large ones have trillions of stars. Many of those stars have their own solar system that houses many planets and their moons.

The gravity that holds all the stuff in a galaxy comes from a large black hole at the center of a galaxy. But, a black hole alone is not sufficient, dark matter also takes part in holding and shaping a galaxy. Scientists have estimated that there are more than 100 billion galaxies in the observable universe.

How Galaxies Are Formed?

The formation of first stars in the universe happened around 180 million years after the big bang. Astronomers think that early galaxies were the groups of roughly a million stars. But, how exactly the galaxies were formed is still an open question. Because there are many factors that took part in the formation of galaxies other than matter. For example, dark matter also took part in the formation and shaping of galaxies. The findings from the Hubble telescope suggest that the early galaxies started to form around 1 billion years after the big bang.

Galaxies have various shapes and physical properties but all of them can be divided into 4 types. These are elliptical, spiral, barred spiral, and irregular galaxies.

Barred Spiral Galaxies – These galaxies have a rectangular type of bar in the center, and spiraling arms beginning from the ends of the bar. Our own galaxy, Milky Way, is also barred spiral galaxy.