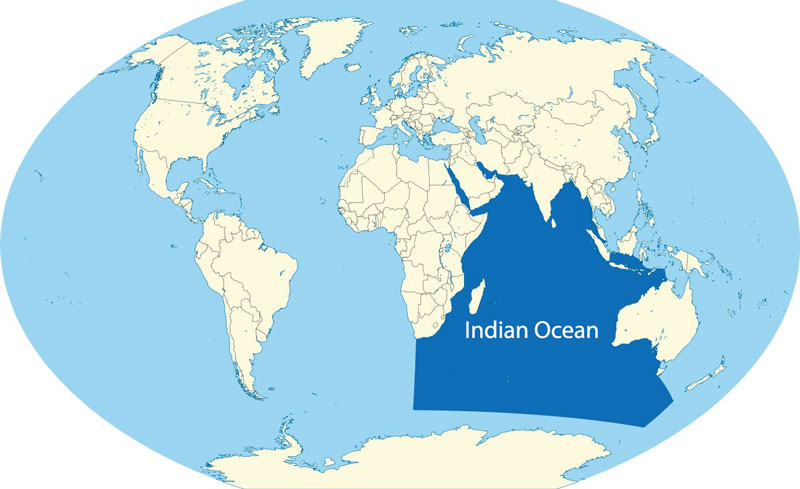 Indian Ocean’s salinity is highest in the northern region, known as the Arabian Sea, due to the higher amount of evaporation and low precipitation. However, the salinity drops from the north region towards the southeastern region. The least saline region of the Indian Ocean is the Bay of Bengal. It has less salinity due to the inflow of freshwater rivers and a higher amount of precipitation.

There are two main gyres (systems of circulating ocean currents) in the Indian Ocean. One is in the northern part which flows in the clockwise direction, and the second is in the southern part which flows in the anticlockwise direction. These ocean currents are highly affected by monsoon (seasonal changes in precipitation and circulation of the atmosphere).

The waterways in an Ocean or a Sea are routes that connect different Oceans and Seas. The Indian Ocean has four major waterways; The Suez Canal, Bab el Mandeb, the Strait of Hormuz, and the Strait of Malacca. Among these waterways, the Suez Canal is the busiest and most used waterway that connects the Red Sea (region of the Indian Ocean) to the Mediterranean Sea for transporting goods from Asia to Europe.

Islands of the Indian Ocean

There are about 1,382 islands in the Indian Ocean including habited and inhabited. Among these Islands, the five larger Islands are Madagascar, Sri Lanka, Grande Terre, Nias, and Socotra. Madagascar and Sri Lanka are the independent Island countries

A tsunami is a sequence of powerful waves in the ocean generated by earthquakes or underwater volcanoes. In December 2004, a powerful earthquake happened in Indonesia with a magnitude of 9.1. Due to this, the most powerful tsunami in the past 40 years was generated in the Indian Ocean. Around 14 countries were affected by this tsunami and a total of 225,000 people were killed.