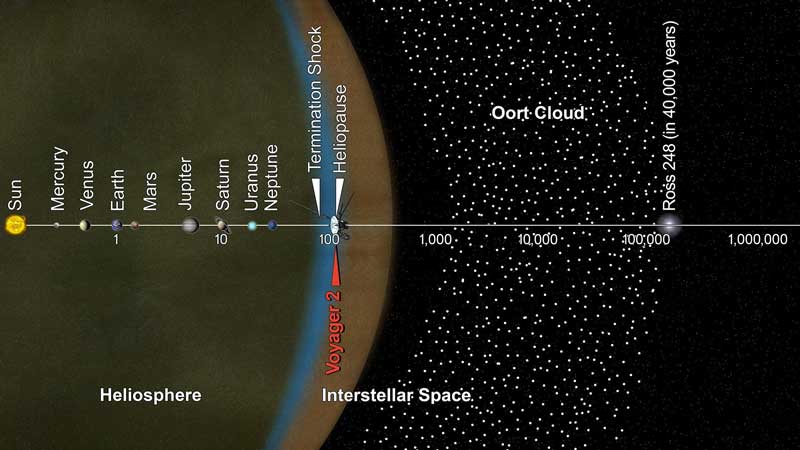 Oort cloud is a very large spherical region that surrounds the whole of the solar system including the Kuiper belt. The diameter of the Oort cloud is about 1 light-year (i.e. 9400 billion km) and it starts from 7.5 billion kilometers away from the Sun.

What Is Inside The Oort Cloud?

Oort cloud is very big as compared to the region covered by the Sun, planets, and Kuiper belt combined. The light which travels at the speed of 300,000 km/s roughly takes a year to cross the outer reaches of the Oort cloud.

The total mass and the number of objects in the Oort cloud are not known. It is because the objects in this region are smaller and very far from the Earth which makes it difficult to observe them. But scientists have found a rough estimation of Oort cloud’s mass which is equal to 5 times the mass of Earth.

Formation Of The Oort Cloud?

The objects in the Oort cloud were formed along with the planets and were not always that much away. After the formation of planets, the planets interfered with the orbits of smaller objects and pushed them out from their orbit.

The most influential planet to knock smaller objects out of the inner region of the Solar system was Jupiter. Over time, the objects went away and settled in the Oort cloud where the influence of planets is negligible. The Oort cloud also houses alien objects (objects that were not part of the Solar system) that came from other parts of our galaxy.

Jan Hendrik Oort was studying the motion of long-period comets that completed their round trip around the Sun in more than 200 years. By studying the motion, he concluded in 1950 that there must be a massive region, farther away from the Kuiper belt, from which the long-period comets are originated. He named the region, the Oort cloud, and it was only his theoretical work; he never observed objects in the Oort cloud through a telescope.