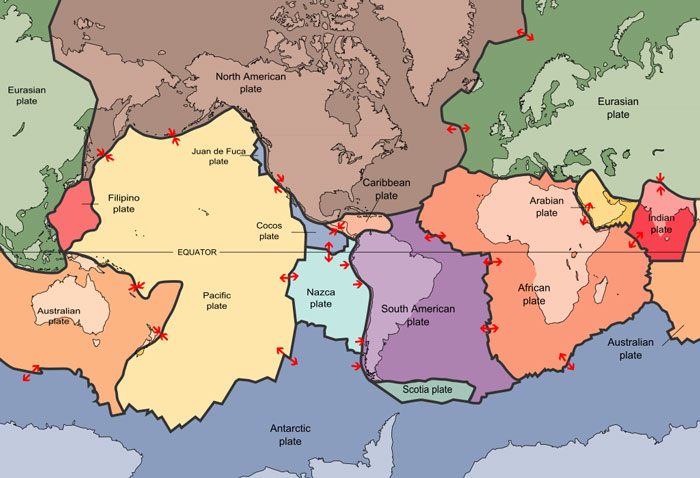 We walk regularly on land and think that it is fixed and does not move. But in reality, the land on which we walk also move. Then why we can’t feel its movement? It is because the movement of the land is so slow that we can’t notice. It only moves a few centimeters each year and takes millions of years to cover a significant distance. This movement of the land on our Earth is described by a theory called plate tectonics.

What Are Tectonic Plates?

There are four main layers of the Earth according to their different properties. These layers are the crust, mantle, liquid core, and solid core. We walk on the crust layer which is solid and floats on the mantle layer. But the movement of this solid surface happens in the crust and the upper part of mantle. The crust and upper mantle part together constitute a layer called lithosphere.

So, how these tectonic plates stay floating on the surface? The reason behind their floatation lies in the composition of rocks. The rocks which make the lithosphere are less dense than the liquid rock of the mantle layer. This density difference in the rocks makes the tectonic plates afloat and keep them from sinking.

Have you watched the boiling water in a pan? If yes, then you may have noticed that the bubbling water from the bottom of pan comes to the surface. Whereas, the surface water goes back to the bottom. This effect is called convection and it is the main driving force behind the movement of tectonic plates. In mantle layers, the hotter rock near the core rises upward and colder rock sink to the bottom. These convective currents move the tectonic plates by pushing, spreading, and pulling them.