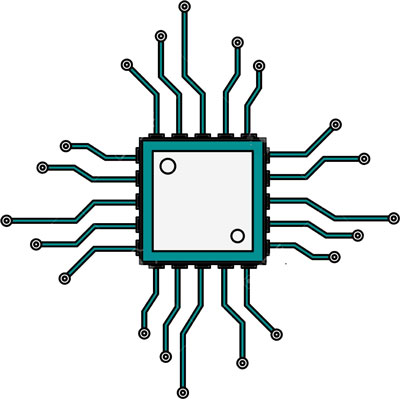 A semiconductor is a material known for its use in the digital world. Most of the electronic devices are based on it. Small devices like a diode, transistor, and integrated chips (IC) are built from it. These devices are used in computers, games, radio, mobile phones, robots, automatic factories, and many others. The technology around us today is mainly driven by semiconductors.

There are two types of semiconductors: intrinsic and extrinsic. A semiconductor in its normal state is called an intrinsic semiconductor. Intrinsic means which does not contain any addition of external material or impurity.

However, an extrinsic semiconductor contains an addition of other materials to increase its electrical strength. The external material is known as an impurity and the process of adding impurities is known as doping. In the doping process, two different kinds of semiconductors are obtained; one is called N-type, and the other is called P-type material.

When a semiconductor device with two layers (combination of N-type and P-type) is given a voltage, it allows the flow of current. The current runs from the N-type block into the P-type block. Hence, it conducts only in one direction. But when voltage polarity is changed, the semiconductor device does not pass the current. This 2-layer and 2-pin device is also known as a diode.

Another arrangement can be a 3-layered device i.e. NPN or PNP; Where either two blocks can be N-type with one P-type or two P-type blocks with one N-type. In this case, to start a semiconductor device with 3 layers and 3 pins, the voltage would be applied to the pins of NP and PN blocks. A 3-layer semiconductor device is also called a transistor. You should check our transistor article to understand its working.

Semiconductors are widely used in both analog and digital electronics. There are a lot of its applications. A few of them are:

Semiconductors were first used in the 1820s. But the first semiconductor device was developed by Karl Ferdinand Braun in 1874 known as the crystal detector – a diode. Later in 1947, John Bardeen, William Shockley, and Walter Brattain invented the transistor at Bell Laboratory.