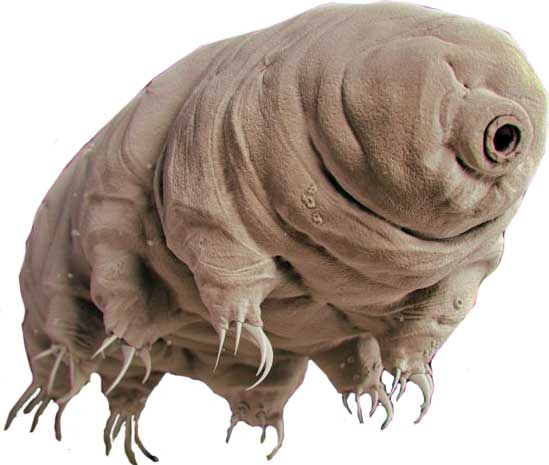 Meet one of the smallest animals, the tardigrade, one of the most resilient and toughest animals found on the Earth. Tardigrades are very famous for surviving almost all the extremes conditions, e.g. space, volcanoes, high pressure, dryness, hot, and cold.

What Extreme Environments Tardigrades Can Survive?

There have several reports from many scientists that, tardigrades have been spotted in hot boiling water of natural geysers and highly cold environment of Antarctica at around -40 °C. Scientists have even sent the tardigrades to the moon and still think that tardigrades have many chances of surviving at the moon.

Scientists even think that they have survived the past global mass extinctions which includes meteorite impacts, high energy bursts of gamma rays, and several other astrophysical events of the past.

Tardigrades gain the ability to survive extreme environments by bringing some transformations in themselves. When they encounter extreme conditions, they change state from normal to cryptobiosis; also called death-like state. In this state, their metabolic activity (life-sustaining chemical reactions) drops to an undetectable level. Further, their body turn curls and becomes dehydrated for protection purpose.

The tardigrades get to their normal state when environmental conditions become favorable and they somehow get hydrated again.

Tardigrades are categorized as micro-animals and their average length is around 0.5 mm. They are so small that you can’t see them without a microscope. Their body looks similar to household worms, but they are different from them. They have 8 legs and each of them have claws at their feet for moving on various surfaces. The body of an average-sized tardigrade is roughly made of 40,000 cells. Also, there are a few species of tardigrades whose length can reach up to 1.2 mm and they have large number of cells.

Tardigrades mostly depend on fluids coming out from moss, lichen, and algae for their food. There are few species that are carnivores that can even survive on other living organisms or can kill other tardigrades for food.

Tardigrades are one of those living things that are found across the whole Earth. They are living in Antarctica, deep oceans, high mountains, volcanoes, cities, and forests etc. They can survive almost any environment, but they mostly love to live in wet environments; because they love water! The most likely place of their occurrence is near mosses and algae.