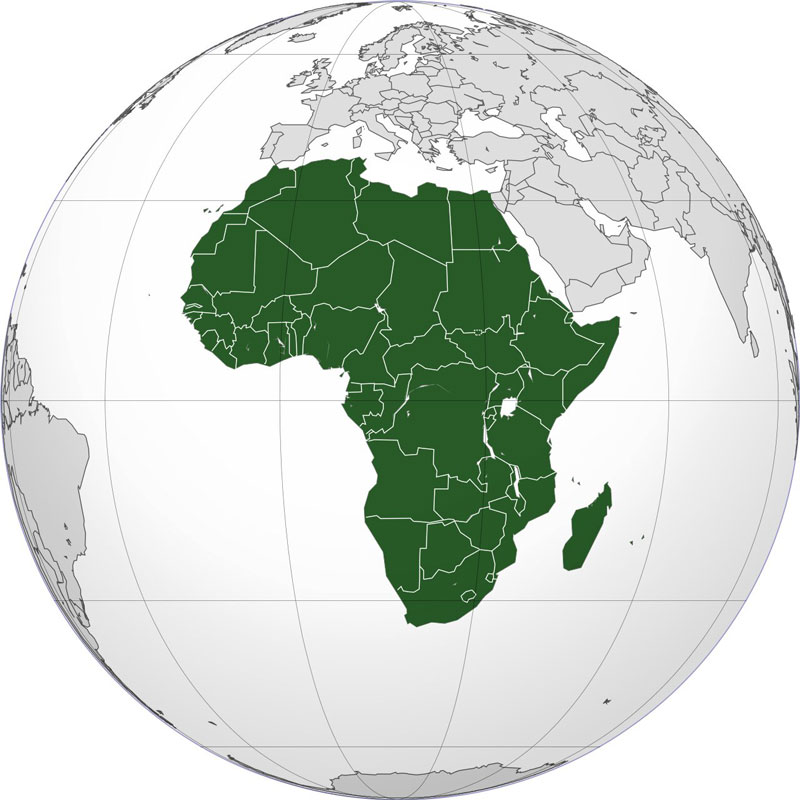 Africa covers 30.3 million km2 of land area which accounts for 6% of the total Earth’s surface area (including land and oceanic area). Africa is surrounded by the Atlantic Ocean on its western side, the Indian Ocean towards its Southeast, the Red Sea towards the Northeast, and the Mediterranean towards its Northern side. Africa contains 54 recognized countries which makes it the largest continent by the number of countries. The largest nation in Africa by area is Algeria, and, the largest nation by population is Nigeria.

The climate of Africa fall between the tropical and subarctic range. The temperatures are coldest on the peaks of mountains, and hottest in desert areas. The northern parts of Africa are mostly deserts or arid due to less rainfall and the unavailability of rivers. Deserts and drylands cover about 60% of the African land. Whereas, the remaining 40% is covered with grasslands and forests. The hottest temperature in Africa was recorded to be 58 ⁰C in Libya in 2013.

Africa is well known for being the origin of human beings who then migrated to different parts of the world over a long period. Culturally, Africans are very diverse, they spoke around 1,500 unique languages (a little less than Asia). The Northern half of Africa is a Muslim-majority area. While the remaining half is Christianity dominant area. By percentage, 32% of Africans are Muslims, 62% are Christians, and the remaining 6% are from other religions.

Africa is the continent where the oldest traditions of culture are still alive from thousands of years ago. Unfortunately, colonial regimes in the past have suppressed the practice of traditional culture. Africa has a rich history in art, architecture, music, sports, and dance. The great pyramids of Giza are one of the most remarkable architecture in the history of mankind and are located in African Egypt.

African Continent has many remarkable geographical features and many are unique. The most famous geographical feature is probably the Sahara Desert; the largest desert on Earth. The Sahara desert has an area of about 9.2 million km2 which takes up around 30% of African land. The second most prominent feature is the River Nile which is 2nd largest river in the world after the Amazon River. The other remarkable features in Africa are Lake Victoria, Mount Kilimanjaro, Victoria Falls, and Ituri Rainforest.