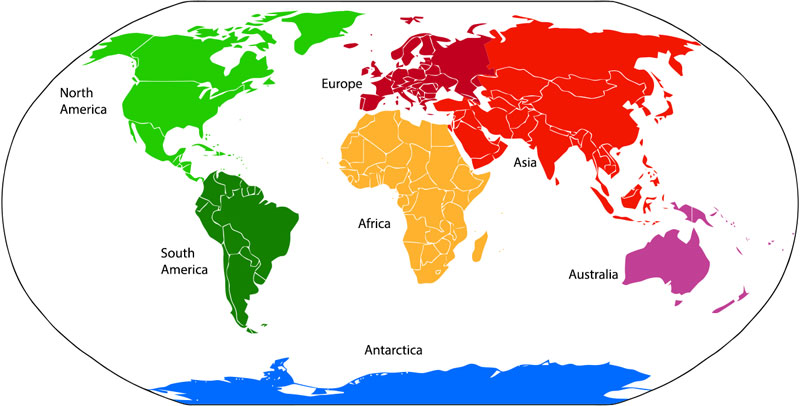 Continents are large masses of continuous land above sea level. The land surface of our Earth has been divided into seven continents; Asia, Africa, North America, South America, Europe, Australia, and Antarctica. Geographically, each continent is divided into many countries, for example, Asian Continent has 48 recognized countries by United Nation.

How Continents Are Divided?

Our Earth has been divided into seven continents geographically. These seven continents are not divided based on the pure scientific definition. For example, it is assumed that our 7 recognized continents are distinct masses of land. But in reality, only Antarctica and Austria are the only separated land masses. Other continents are somehow connected e.g. Asia is connected with Africa by a 125 km wide land bridge called the Isthmus of Suez.

Furthermore, Europe and Asia are a single largest landmass called Eurasia. But still, they are recognized as separate continents by cultural and language differences. If we strictly follow the distinct landmasses definition of continents. Then we will be left with only four continents which are Afro-Eurasia, America, Australia, and Antarctica.

How Continents Were Formed?

The surface of the Earth (including the land and oceanic floor) is composed of many pieces that are joined together like a jigsaw puzzle that floats on the mantle layer of the Earth. These pieces are called plate tectonics which are under constant movement since the formation of the Earth. The present-day continents, as seen today, were not in the same place and shape in the past. The position, size, and shape of these continents have been changing due to plate tectonics activity.

The development of continents is not stopped yet, they are still moving at the speed of 2 cm per year. If you fast forwards the time, you will see California will be detached from North America and will become an island.