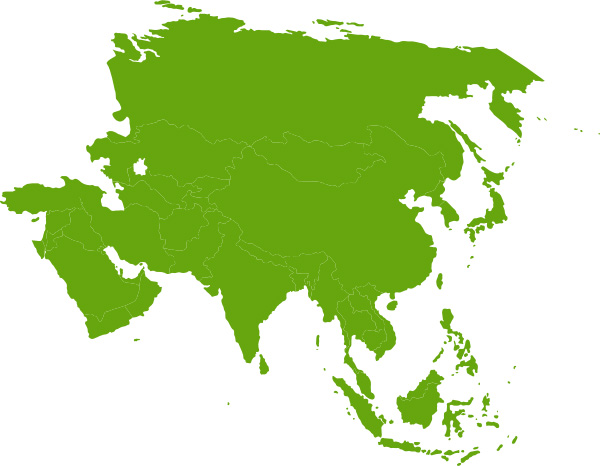 Asia is the largest continent on Earth featuring diverse cultures and History. It has around 4.4 billion human population which accounts for 60% of the world’s human population. It covers about 30% of the total land area of the Earth with 48 recognized countries by the United Nations.

The average elevation (distance above sea level) of Asia is between 900 – 1220 meters which makes it the highest elevation continent. The highest peak on Earth, the Mouth Everest, also lies in Asia at the height of 8.85 kilometers. Asia has 62,800 kilometers of coastline with 3 major oceans; the Pacific, Indian, and the Arctic. The coastline is mostly mountainous and the remaining is sandy surface. Asia has a diverse climate that ranges from tropical in the Indian subcontinent to the arctic in Siberia.

A large variety of people live in Asia which has 2,300 languages in different regions. Many of those languages have functionally become extinct, and only less than a thousand people speak them. Other than this, Asia is the land where all the major religions and a few hundred minor religions originated and preached. By population, Islam is the dominant religion in Asia, then comes Hinduism.

The settlement pattern of Asian people mostly formed around agriculture. The rural area population is increasing quite faster in many Asian countries. Recently, China and Russia have initiated many programs to settle people from densely populated areas to frontier zones to develop industrial and agricultural sectors.

The diverse communities living in Asia make it very colorful in terms of the tradition of literature, lifestyle, politics, music, architecture, and art. The Islamic culture is the most dominant in Asia, then comes Buddhism and Hinduism. These dominant cultures have a strong influence over other communities.

Most of the Asian land consists of mountain ranges and plateaus which account for 75% of the total land area. The largest mountain range in Asia is the Himalayas which is situated in 4 countries; India, China, Nepal, and Bhutan. The largest peak, Mount Everest, is also part Himalayas. The remaining 25% of the land consists of plains with many wide valleys from which rivers flow. Asia has many great rivers, some of them flowing from multiple countries. Examples of these rivers are Indus, Yangtze, Yellow, Mekong, Yenisei, and Lena River.