Apatosaurus is one of the largest known species of dinosaurs and is recognized for its very long tail and neck. Apatosaurus is an English word that has been derived from two Greek words; apate (deceptive) and sauros (lizard). Thus, it would mean “deceptive lizard”!

Apatosaurus inhabited the earth in a time known as the Jurassic period that happened nearly 150 million years ago. Their fossil remains were discovered in various parts of present-day North America. Brontosaurus is yet another name for Apatosaurus but used rarely. The name Brontosaurus was used by common people in earlier days when its identification was still unclear.

These amazing dinosaurs were large-sized with a prominently long neck, four stout legs, and a strong tail that resembled a whip. Their tail probably balanced their extraordinary long neck. Moreover, they possessed a comparatively smaller head as compared to their overall body. An average-sized apatosaurus was around 23 meters long and 5 meters tall. They easily attained a weight of 20 to 25 tons when reaching their adulthood.

Initially, the scientific community held the view that apatosaurus lived in swamps and other water-bodies. These assumptions were made because of their huge size and nostrils that were located at a higher position. However, this view was later on discarded because no fossil of them was ever found in ancient water-bodies.

The habitat of apatosaurus is not yet clear. But, there are high chances that they might have chosen areas near water-bodies as their habitat. Because those regions were easy for them to seek water, trees, and other plants to feed upon. Furthermore, they couldn’t inhabit forests because of their overwhelming size that might have hindered their movement in forests – especially the dense ones.

Apatosaurus was a herbivorous animal that consumed a variety of vegetative material. It is generally believed that these dinosaurs consumed plants that were near ground level. However, chances are present that they used their long and flexible necks to reach soft leaves available on various heights of trees.

They usually swallowed very large amounts of the plant directly into their stomach without chewing. They also took small stones along with vegetative material to help them in the digestion process. According to a scientific estimate, they consumed around 400 kg of plant material daily for their survival.

Due to their large size and huge requirements of food and water, they usually lived near water bodies such as lakes and rivers. The offsprings of these dinosaurs could not hide them easily and they were vulnerable to the attacks of predators – especially when drinking. Thus, they needed to be accompanied by their elders. In this way, family-packs, groups, and even herds were organized by them. However, solitary time was not an exception.

Generally, Apatosaurus were not offensive attackers on their own. But to counter the attacks of predators for defense purposes they engaged in fights. They could walk long distances to reach known sources of water or in search of new locations of water and plantation. Mostly they grazed during day time. But rarely, they also grazed at night. 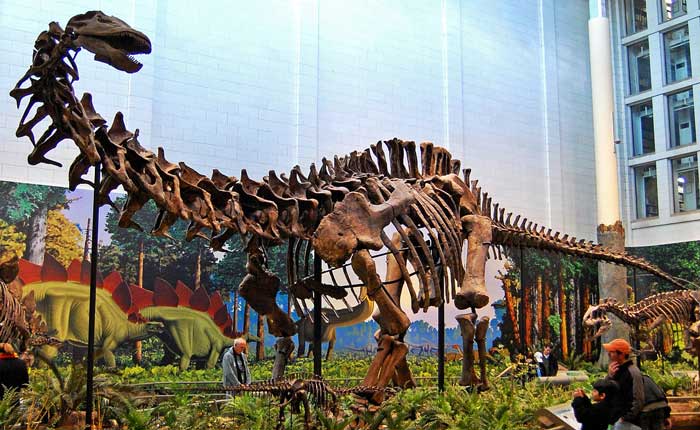 Fossil remains of Apatosaurus were first found in Wyoming, Colorado and some other states of the US. In 1877, Charles Marsh gave the name “apatosaurus” to these dinosaurs. Initially, the apatosaurus was confused with Brontosaurus. The confusion occurred because their partial skeletons and heads were discovered and paleontologists and other scientists had to jot down the pieces of the puzzle. Later, apatosaurus became clear and the identification was accurately redefined.