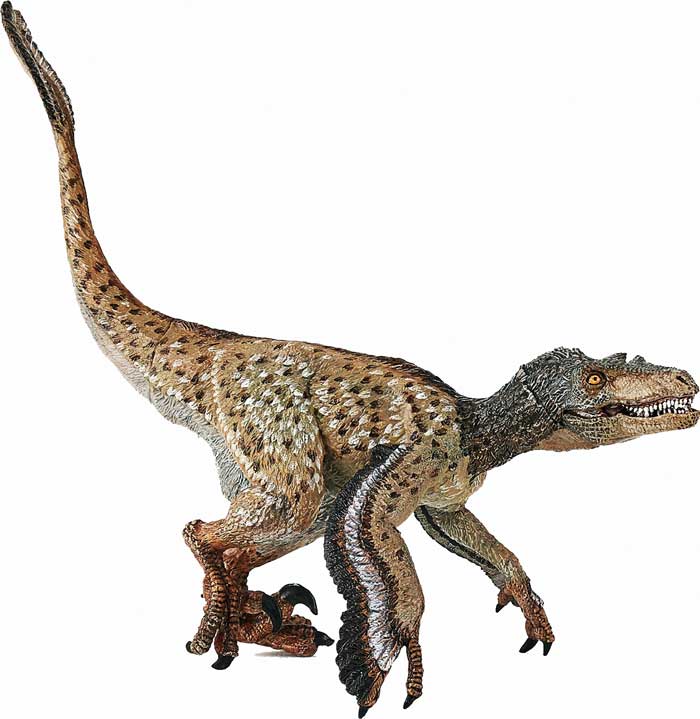 The word “Velociraptor” has been derived from the combination of two Latin words, which are “Velox” means swift, and “raptor” means robber or plunderer. So the meaning of Velociraptor would be “swift robber”. They had easily reached the speed of 60 to 70 km/h. Velociraptor is a genus under the family of Dromaeosauridae. These dinosaurs had lived on the Earth nearly 75 million years ago. Among the several species of Velociraptor, the most well-known species are V. mongoliensis and V. osmolskae. The fossils of these two species have been found from most parts of Mongolia. The fossils of these species include various bones and their skull.

Velociraptors were generally fast-moving bipedal dinosaurs having feathers on their body – much like birds. However, they remained flightless probably due to their small arms. Perhaps feathers kept their bodies warm and helped them in attracting their opposite sex.

Velociraptors were of smaller size as compared to other dinosaurs in the family of Dromaeosauridae, such as Deinonychus and Achillobator. Each of their hind-foot was equipped with a large sickle-shaped claw, which they used against their prey. They had a quite long tail which helped them in balancing and also in the fighting.

They had a long and low skull having an upturned snout. Their size was broadly comparable to that of a turkey, of their time. Moreover, they had around 15 teeth in their upper jaw and 15 teeth in the lower jaw. Their body-length reached was between 6 to 7 feet, and their hip-height was up to 1.6 feet tall. The weight of an average-sized velociraptor was about 15 Kgs.

Velociraptors mostly lived in various parts of Asia, such as China, Mongolia, and Russia. They preferred hot and sandy dunes for living. Furthermore, their fossils have also been discovered from near water-bodies. Deinonychus – a related dinosaur – lived in the regions that are known as the present-day United States of America.

Velociraptors were carnivorous animals that consumed amphibians, reptiles, insects, mammals, and other small dinosaurs. Among them, they preferred to consume plant-eater dinosaur, namely, Protoceratops. Most often they also ate dead animals that were killed by other predators.

Some fossil records also suggest that they might have hunted large-sized animals. In a group, they encircled and isolated their prey from its herd. After then, they kill it and eat it together. Velociraptors exhibited both the predatory behavior and the scavenging behavior to seek their diet.

Little is known about life and behavior of velociraptors but scientists are learning as new fossils are found. It is believed by the scientific community that these dinosaurs were night-raiders. Probably they hunted by ensnaring (trapping) their prey that was leaping down from trees and the associated vegetation.

They might have been leading solitary life but occasionally they formed groups to hunt larger animals. They also formed groups for walking together, sweeping together by fast-moving waters, and to coop with geological activities, such as fast blowing wind. It was a clever animal but didn’t possess overwhelming IQ as depicted in many films, such as Jurassic Park. However, due to a lack of scientific evidence, most of the ideas are based on speculation. 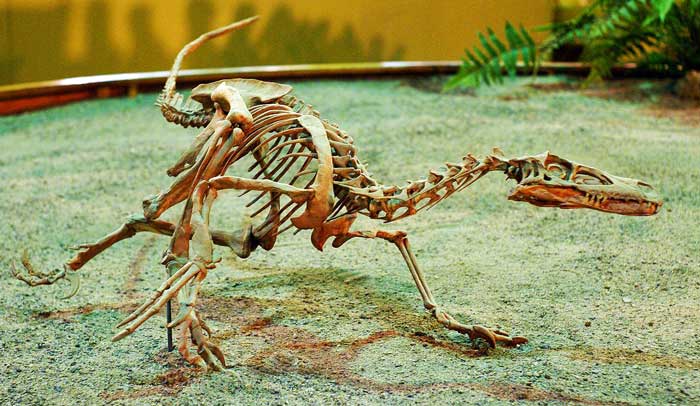 The first Velociraptor – V. mongoliensis – was discovered in August 1923 in the outskirts of the Mongolian desert of Gobi.  The other species – V. osmolskae – was unearthed from the inner parts of Mongolia. These velociraptors were named by Osborne in 1924. Some other fossil remains of the velociraptor were found in the dry and sandy dunes of the country. Southern Mongolia and parts of northern China also have their share in the fossils of velociraptors.