Triceratops are one of the famous dinosaurs which are known for their 3 horns and a frill around their neck. The name “Triceratops” literally means “three-horned face” because they have three horns; two are on the head and the third one is located above the nose.

Triceratops have lived on the Earth around 68 million years ago. So no early human has seen them in real. However, with the help of their fossil remains and computer simulations, scientists have created their fairly reasonable images. The name triceratops was given to these dinosaurs by Marsh in 1889.

Triceratopses were heavy-weight animals, having three horns and a frill over their neck. Their upper lips-ending was similar to parrot’s beak. They were quite impressive animals and their size was slightly less than elephants.

Triceratops were about 8 meters long when measured from head-to-tails and weighed around 5 metric tons. They had four thick legs and a strong tail that helped them in the defense. They had their front legs shorter as compared to back legs. Each front leg had three hooves, whereas, each back leg had four hooves.  It is believed that they held an upright posture resembling with elephants. The largest discovered skull of Triceratops was around 2.5 meters (8 feet long). This length indicates a possible variance in the size of triceratops.

According to scientific research, it appears that Triceratops were herbivorous animals (consumed vegetative diet). They most likely preferred dry or forest areas where vegetation was abundantly found. And the landscapes of such old pre-historic times were drastically different from those of present times.

Most of the fossils of triceratops were discovered from North America. But, some fossils have also been found from Canada. It is believed that Tyrannosaurs were their typical predators against whom Triceratops used their defense mechanisms.

These huge and heavyweight animals were herbivorous i.e. eating vegetative material. They ate ferns, cycads, palms, and a range of other vegetation as their food. They were fast-moving animals and could eat hundreds of pounds in a single day.

It is believed that due to the lower head position and the type of their teeth, they consumed vegetation that was near the ground. They might also have used their strong body and horns to bring down the taller trees for consumption.

There is no evidence whether they lived in herds or led a solitary life. Group fossils of Triceratops have been discovered but the nature of their groups, families, and social interaction is not certain yet. The injury marks observed on fossil remains of the animals suggest that they occasionally engaged in mutual fights. 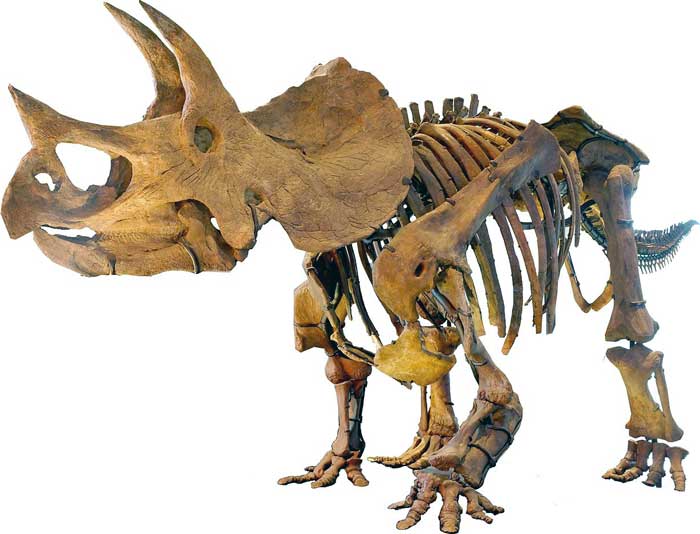 In 1888, the first fossils of these dinosaurs were discovered in Denver, Colorado, USA by John Bell Hatcher. He had found a pair of horns from the head of the triceratops. Initially, the species was thought to be a variant of bison. But later on, further evidence allowed scientists to identify them as triceratops.

Charles Marsh coined the name “Triceratops” for them. Fossil remains of triceratops were also found in South Dakota, Canada, and Montana. So far, more than 50 skulls of triceratops have been found but the complete skeleton is not found yet.