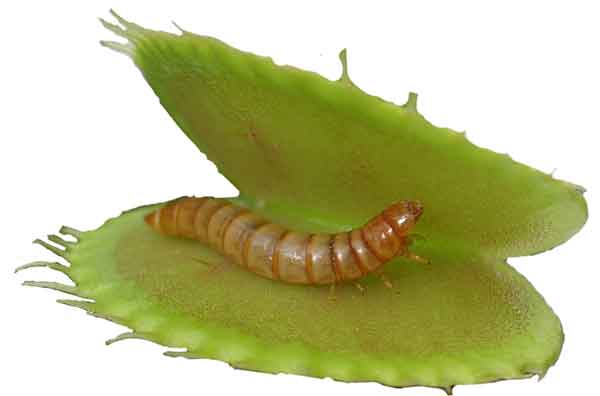 Why do Plants Eat the Meat?

Carnivorous plants are mostly found in the places where the soil is poor in minerals. So, they can’t get necessary minerals with the help of their roots. They had to find a way to get rich food source. For this, these plants have evolved to catch and digest the small creatures like bees, flies, and smaller frogs.

How do They Catch the Bugs?

In this trap, plants use special glue on their leaves that is secreted by their glands. When bugs sit on their leaves, they are stuck on it and can’t fly away. “Drosera capensis” uses this trapping mechanism.

In this trap, plants catch their prey with their mouth shaped leaves whose outer edge is covered with spiky hairs. When a bug lands on its leaf, it senses its movement and shuts instantly. “Venus Flytrap” uses this kind of trap to catch bugs.

The plants that use this trap lives in the water. They just suck-in the insects from the water in their bladder for digestion. “Utricularia vulgaris” uses this kind of trap.

It is the chamber in the plants which is easy for the bugs to enter but very difficult to go outside. Also, it has inward pointing bristles which further makes the outside route more difficult. “Genlisea violacea” uses this kind of trap.

How Much Bigger They Can Grow?

Don’t be afraid! Carnivorous plants mostly grow up to 12 inches (1 foot) long, so they are unlikely to trap people and bigger animals. However, some of the species can grow up to about 3 three feet long.