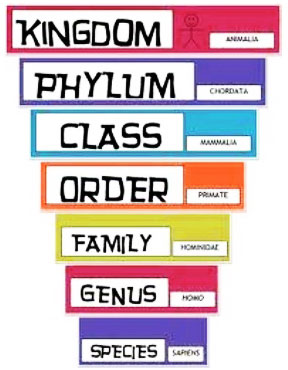 Due to classification, scientists can easily differentiate and defines the characteristics of newly discovered organisms.

How Living Things Are Classified?

Biological scientists have classified all living things into several levels depending on their structure, behavior, and characteristics.

There are currently 7 levels of classification (excluding domain) for classifying any living organism. These are:

These levels can easily be written and remember in their short form which is K-P-C-O-F-G-S.

The domain defines how kingdoms are related to each other by sharing some common properties at the cellular level. Currently, 3 known domains of life define every living thing on the Earth. These domains are Archaea, Bacteria, and Eukarya.

Generally, the first level of classification of living organisms is the kingdom. Currently, there are five main kingdoms which are known as Protista, Fungi, Plantae, Animalia, and Monera.

Organisms that share common kingdom have something in common. For example, organisms in the Animalia kingdom (animals) depend on other organisms for their food. On the other hand, organisms in the Plantae kingdom (plants) produce their own food by photosynthesis.

Class is the 3rd level of classification and hosts those organisms which are similar in some sort after phylum. For example, mammals, reptilian, and amphibians are classes of Chordata phylum. Organisms in the Mammalia class give birth to babies and don’t lay eggs. Moreover, they feed their babies with milk.

Orders are further divided into the next level called ‘Family’ which is the 5th level of classification. Some of the famous families in the order of Carnivora are Canidae and Felidae families. In the Canidae family, organisms that share some similarities are dogs, foxes, and wolves. Whereas in Felidae family, household cats, cheetahs, leopards, lions, and tigers share similarities – such as walking style and sound.

Species is one of the most famous classification levels among people. It includes all the organisms that are similar to each other from every aspect, such as humans. Each species of organisms has its unique characteristics, shape, behavior, style, colors, and ecosystems. For example, in Panthera Genus, tigers have their species called “Panthera Tigris”. And leopards have their own species called “Panthera Leo”.

Humans have been given a biological name that is “Homo Sapiens”. Humans are classified as: