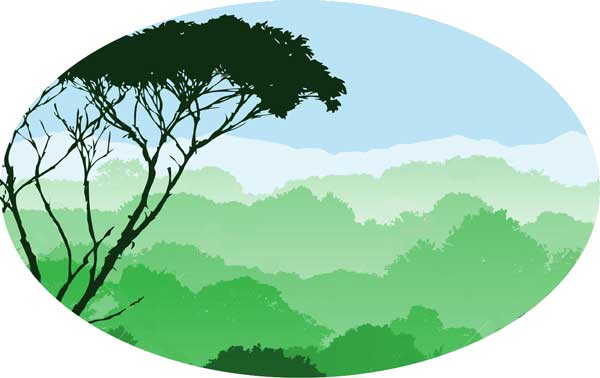 A forest is an area on a land which is occupied by the small and large trees. The forests are categorized by the amount of rainfall and temperature. The forest that receives a lot of rainfall throughout the year with warm temperatures is called rainforest.

The rainforests receive about 250 to 450 cm of rainfall annually. These forests are usually warm with a temperature above 90 F (32 C). Rainforests are sometimes confused with jungles; both are different from each other. A rainforest has tall trees that cover the top of a forest and blocks most of the sunshine. Whereas, a jungle is not a restricted region; it may have small trees, larger trees, open grassy grounds. 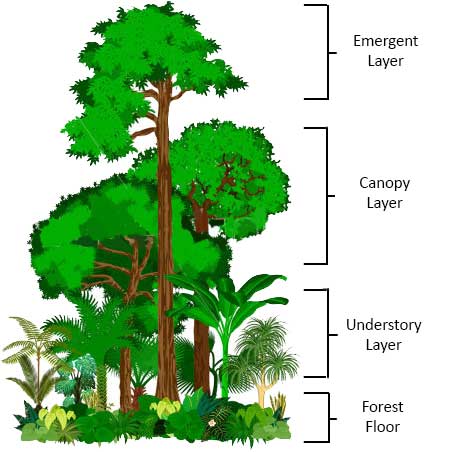 The organisms living in the rainforest have adapted themselves to live in a particular layer of the forest. Rainforests have 4 layers that are occupied with different plants and animals.

Rainforest covers a very large area of the earth and gives it the green color. The net oxygen produced by the rainforest during daytime is negligible because they take about the same amount of oxygen in the night. However, Rainforest like Amazon plays a vital role in the production of oxygen indirectly. The decay of dead plants produces rich minerals which are washed in the ocean when it is raining. These minerals are food for the small sea creature like plankton. Planktons are producers of the majority of the oxygen on earth. Other than this, rainforests have effects on the formation of the clouds and supplies humans with a great number of herbs for medicines and wood.

The area covered by the rainforests on the earth is shrinking day by day. The main cause behind the shrinkage of forests is human activities. Humans have been destroying forests for clearance of the land for their own use. This destruction of forests has accelerated in the past few decades due to the increase in human population. As a result, the environment is badly affected. It is found that 80% of the animals and plants on earth are living in the forests. Deforestation has abandoned habitats of millions of species and caused many species to go extinct. Many species are declared as endangered; if certain actions are not taken, these species may go extinct.

Another major effect that is caused by deforestation is climate change. Plants in the forests absorb greenhouse gases which protect against global warming. If somehow these forests disappear from the earth the water cycle will disturb and rate of global warming will increase dramatically. Actually, humans are not only destroying the life of animals and plants, but they are also hitting axe on their own feet. Because climate change is also disturbing our own lives.