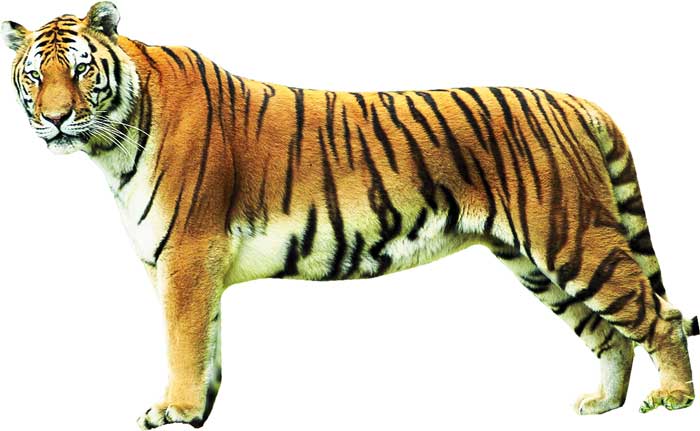 Meet the tiger, the largest cat in the world which also larger than a lion. A tiger (Panthera Tigris) looks very much similar to a lion because both are the large cats. However, they are also different from lions because they have different colors and have much smaller mane (hair surrounding neck) than lions. Tigers are famous for their light orange color with a reddish hue and black stripes on their body. They belong to the Family Felidae and Genus Panthera. 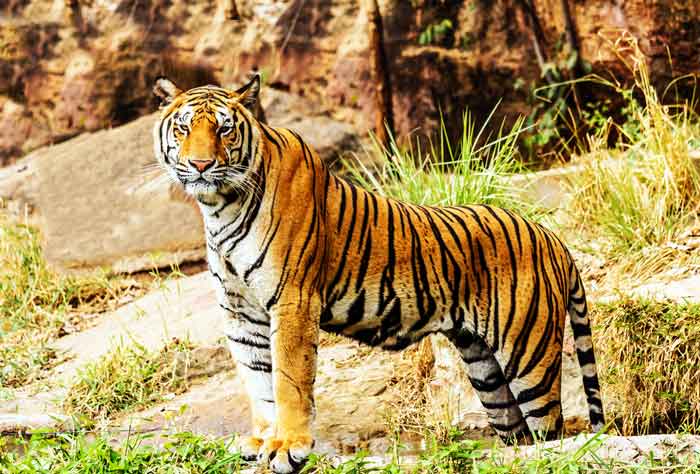 Tigers are considered as largest wildcats in the world. Their females are usually smaller in size from their male counterparts. Their average height reaches 3 feet, and in many cases, tigers with a height of 3.3 feet have also been observed. Also, they have a longer tail which also measures around 3 feet. Tigers have a powerful muscular body which allows them to run as fast as 30 to 40 Km per hour (max at 65 km/h). Also, they possess very powerful forelimbs which help them in fighting with other predators.

Each member of their species possesses distinct and unique vertical black stripes. These stripes help tiger in camouflage and help them to effectively mingle with the environment. Moreover, it also prevents them from being noticed by their prey.

The hair growth around their neck is somewhat similar to a lion’s mane. Their upper lip has long whiskers (projected hairs) and their eyes are equipped with yellow-colored irises. Moreover, their eyes shine brightly during night-time. They have a small and rounded pair of ears which is marked with many spots.

Tiger’s skull differs in many ways from that of lions due to their larger size. They have stronger jaws that are fitted with stronger teeth which give them tremendous bite strength. Furthermore, they have powerful paws which they also use to fight with other predators. Their style of fighting is quite similar to a boxer. 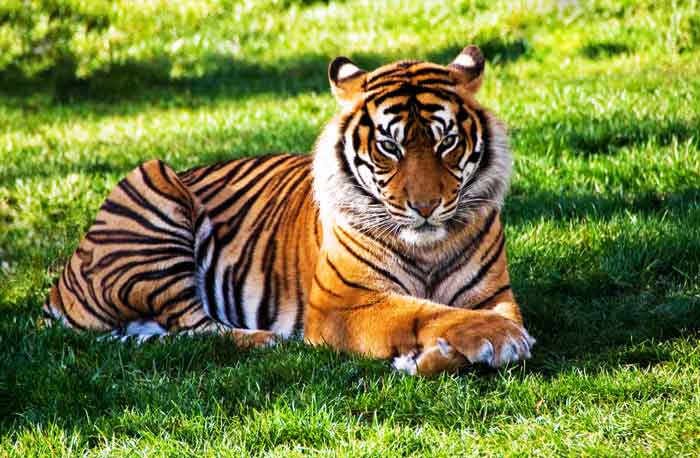 Tigers have been thriving from eastern parts of Turkey to coastal areas of the Sea of Japan. And also from South Asia to Southeast Asia (up to Indonesia). Moreover, Tigers are abundantly found in the subcontinent of India, the Peninsula of Indo-China, and the Far East of Russia. They are also spotted in the Korean Peninsula.

They like to dwell on forest habitats because forests help them in camouflage. However, they prefer different types of habitats in different countries depending on the availability of vegetation, water-bodies, wetlands, swamps, and marshes, etc.

Tigers sit on top of the food chain and have no predators. Wild tigers are known to be the predators of hoofed-mammals of medium to large sizes, such as samba deer, wild boars, and cows. They also catch and eat small prey, such as monkeys, birds, hares, and fish, etc.

Tigers are not only limited to eat only herbivore animals, but they can also even hunt and eat other predators, such as crocodiles, bears, and leopards. They are known to be carnivores (meat-eaters) but occasionally they may also consume some fruits or vegetative material for their fibrous diet.

It is a general belief that tigers hunt during the night-time, but there are chances that they will attack their prey during the day-time if the conditions are suitable. 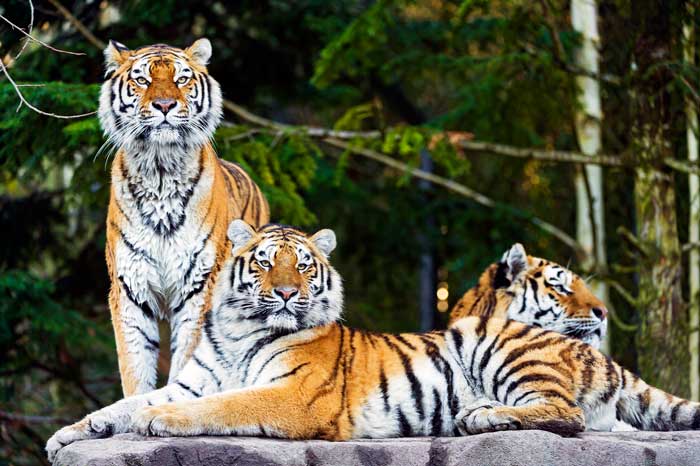 Adult tigers generally prefer to stay alone. For this, they establish their territories by marking evidence of their presence in that territory. For marking, they use their urine and fecal material as markers. Younger tigers try to make their territories closer to their parents but over time they become more independent.

They usually do not interfere with each other in normal circumstances. However, they sometimes share their food even with those who are not attached to them. They use night-time or day-time as per the situation for their hunting activities.

The main threat to tigers is the destruction and fragmentation of their habitats around the world. Furthermore, there is overhunting of tigers, especially in India, which has decreased their population pretty much in the past few decades.