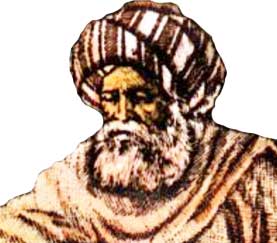 Al-Battani is one of the famous Muslim scholars of mathematics and planetary studies. He was born in the age known as the Golden Age of Islam. With his deep interest in trigonometry – the branch of math that deals with three sides and three angles, he found relations between trigonometric signs like sine, cosine, and tangent. This led him to determine the changing position of the Sun, Moon, night and, day in a year.

Al-Battani was born in the year 858 AD at Harran in Turkey. His full name was “Abu Abdullah Muhammad Ibn Jabir Al-Battani” and his family is known to have been Sabian – a group of people who worshiped stars. But he was a Muslim and believed in only one God. His father was famous for designing scientific instruments. This skill of his father helped him to develop instruments used for working on stars and planets. Besides, his intelligence in trigonometry also helped him to know the relation between sides and angles of a triangle.

He was a brilliant observer of solar and lunar eclipses – events when either Moon or Earth receive a shadow. Al-Battani spent around forty years in Raqqa, a city of Central Syria, where he made vast contributions to science. He also wrote a book on planetary tables known as Kitab Al-Zig. This book was later on used by many known scholars like Nasir Al-Din Tusi, John Kepler, and Nicolaus Copernicus for research on astronomy and trigonometry.

He paved the way for other scholars to work in the future to discover unknown concepts like orbits in space. Al-Battani moved to Al-Samara and then died in 929 AD at Baghdad, Iraq.

Among the various contributions of Al-Battani, few are given below. Apart from them he also discovered, observed and recorded 489 stars. Besides, he also showed the farthest distance of the Sun from Earth known as ‘apogee’.

Al-Battani determined the solar year, changes in seasons, days and nights due to the revolution of the Sun around the Earth in a year, and he also identified a certain number of stars that were not known before. He found and named new stars. Ptolemy’s work on the sun’s farthest point was more accurately confirmed by him.