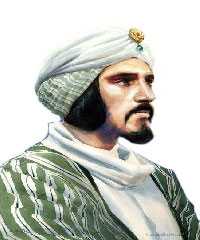 Al-Kindi is one of the most popular Muslim scholars of the Golden Age of Islam. He laid the basis of philosophy in the Muslim world. For this, he translated books Plato, Aristotle, and Ptolemy – the Greek philosophers and mathematicians.

He introduced the art of secret writing and was also good at writing in design beautifully. Al-Kindi spent most of his life at the library called House of Wisdom in Baghdad. And there he wrote books on multiple subjects. He spent last time of his life at Baghdad.

Al-Kindi was born in 801 AD in the city Kufa located in Iraq. He was born in a rich family and has a long name “Abu Yusuf Yaqub ibn Ishaq as-Sabbah al-Kindi”. His father was the governor of Kufa at that time. He received his early education at Kufa. For further studies, he went to Baghdad.

Al-Kindi was appointed in the Grand Library of Baghdad by the ruling caliph (head of state) Al-Mamoon. The library is also known as the House of Wisdom. He was also good at calligraphy – it is an art of writing with beautiful designs. Besides, he was also a polymath – someone who is good at multiple subjects. He worked on mathematics, philosophy, music, medicine, theology – the study of God, revelation, religion, and prophets. Apart from them, he laid the basis of cryptography – it is the art of writing in secret words.

Al-Kindi, later on, became the tutor ruling caliph Al-Mutasim’s son. He wrote over two hundred and sixty books. But most of them were lost when Hulagu Khan attacked Baghdad in 1258 AD and burnt its libraries. Most of his concepts were forgotten ahead because the works of Al-Farabi and Avicenna (Ibn Sina) revised them. Al-Kindi died in Baghdad, Iraq in 873 AD.

Al-Kindi’s hard work and interest in science and philosophy earned him fame during his time. Among various contributions, he discovered a mathematical scale that could measure the effect of the medicine on patient’s health and the days required for its improvement.  Apart from them, the following contributions of Al-Kindi are known as of high value.