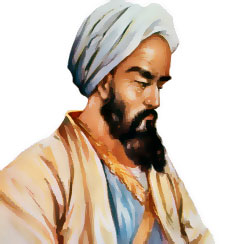 Al-Razi is best known for his role in medicine during the Golden age of Islam. He worked mainly on diseases in children and elders, chemicals used in making medicine, problems related to eye, and got build a hospital in Rey, Tehran. In short, he was a complete doctor. Al-Razi is also known as Rhazes in the west. He was given the title of ‘father of pediatrics’.

Al-Razi was born in Rey, Tehran – the capital of Iran in 853 AD. He has quite a long name, ‘Abu Bakr Muhammad Ibn Zakarya Al-Razi’. After his basic studies, he moved to Baghdad to study medicine. He studied medicine at hospitals and translated the Greek books written on it. This enabled him to write books over two-hundred. With much of the practice at a hospital in Baghdad, he returned to Rey. He was appointed the chief physician and the head of Rey hospitals by the ruling caliph (king) Mansur ibn Ishaq.

Al-Razi taught medicine to students from different parts of the world. Therefore, he was called by them as ‘Shaikh’ – which means a noble person.  He was very kind to his patients and treated them free of cost. Besides, he was also a good player of chess. Hence, he wrote a book on it and named it ‘A Delightful Book about Chess’. Moreover, Al-Razi has classified substances into vegetables, animals, and minerals. Apart from it, he also wrote a monograph on the diseases of children.

In metaphysics – the field of study of religion and material things, he believed that it stood on five rules named God, soul, matter, time and space. However, his religious views were rejected by Al-Biruni, who was the Muslim philosopher of his time and wrote a book on his life. He also worked on the eye, its functions and diseases. Al-Razi suffered from blindness. His optical nerve in the brain was damaged which sends signals from eye to brain. Al-Razi spent his last days in blindness and died in 925 AD at Rey, Samanid Empire in Iran.

Al-Razi’s long services in medicine and optics led him to lay the groundwork for Muslim Scholars to expand these subjects. Avicenna (Ibn Sina) and Al-Biruni followed him and revised most of his works. Among many of his discoveries like chemical instruments to separate one chemical from others, creams for skin use, bottles, and flasks to use in laboratories.

Al-Razi’s sincere work rewarded in the form of fame among Muslim and western scholars alike. He is known for the following discoveries and contributions: