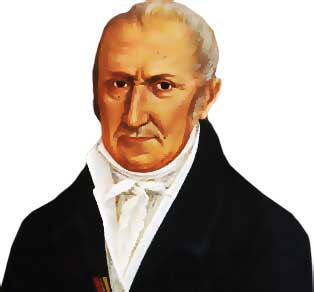 Alessandro Volta is a well-known physicist, who is famous for creating a first practical electric cell. Moreover, his work proved that it is possible to produce electricity through a chemical reaction. He was not just a physicist but was also greatly known for his work in the field of chemistry and electrical science.

Other than this, he was the first person who discovered methane gas (common household gas). He noticed that, if methane is combined with air then it can cause an explosion when ignited with flame.

Alessandro Volta was born in the house of a respectable family in Como Italy in the year 1745. His father, Filippo Volta, left him when he was just 7 years old. In difficult times, his uncle helped him to continue his studies at home and then at the Jesuit boarding school. During his education years, Volta faced many challenges and family pressure to become a lawyer. However, his ideas and aims led him to chose his own path. Alessandro Volta is also honored to have served at the Royal School in Como as a physics professor in the year 1774.

Furthermore, Volta also got the chance to perform his experimental work at Cesare Gattoni’s laboratory of physics. Gottani was a wealthy person and was a Volta’s friend. To learn further, Volta shared his first scientific paper with Giambatista in which he discussed the possibilities of creating electricity by rubbing two substances together.

At last, Volta spent his last days with his wife Maria Teresa and his three sons at Como till his death which happened on 5th March 1827.

There are various contributions that he made to the field of science. Some of his most important contributions including inventions and discoveries are: