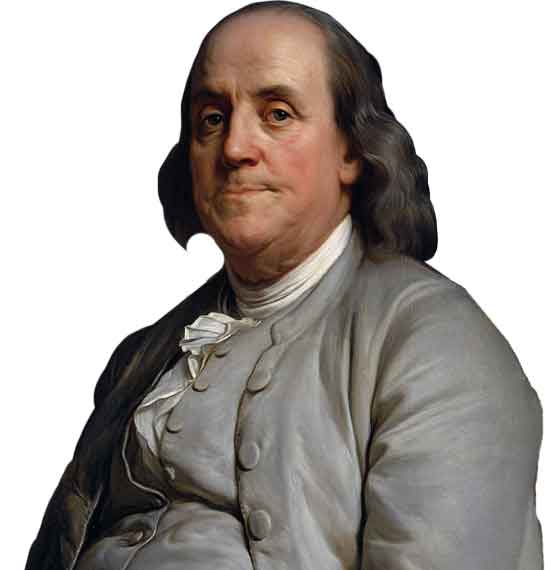 Benjamin Franklin holds the honor of being the most notable figure in the US and the rest of the world. From America’s independence to scientific inventions, his key role remains highly praised. He spread knowledge through newspapers by publishing his inventions. Also, he never claimed the legal rights to be the owner of any invention by registering patents. As a well-wisher of humanity, he rejected slavery.

Benjamin was born in the year 1706 in Boston Massachusetts, British America. His father, Josiah Franklin, was a candle maker and his mother was Abiah Folger. He received his early education at Boston Latin School and left school when he was only 10 years old.

At the age of 12 years, he joined his brother for on-job training on printing. And by the age of 23, he published his newspaper Pennsylvania Gazette. Besides, he worked on scientific inventions as well. By 1767, he began to work with Pennsylvania Chronicle – a newspaper that often criticized British policies. Two years later, he led the resistance against the Stamp Act 1765 that required printing to be done on stamp paper.

In politics, Benjamin received a lot of success and became the first ambassador to France. Due to his clever skills, France became an evergreen friend of the USA and even helped the US by providing weapons. Furthermore, Benjamin also remained the governor of Pennsylvania from 1785 to 1788.

Benjamin’s great role in science is also very remarkable. He is famous for contributing to the field of electricity. Besides, he worked on different subjects like weather, sea tides, winds, and population. In short, his life shows one of the finest examples of modern leaders. Benjamin died in the year 1790 at Philadelphia, Pennsylvania, US.

Benjamin’s inventions and contributions to science are very remarkable. He became a good scientist due to his curiosity for science. Due to his role in the formation of America, he was given the title of “First American”.

Some of the most notable contributions, inventions, and discoveries are: