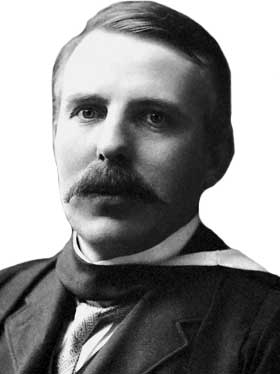 Ernest Rutherford’s exceptional works gave birth to nuclear science. He extended the limit of modern physics by his praise-worthy additions. Atom and sub-atomic particles remained his main topics of research. His excellent abilities and discovery of proton made him noble prize-winner. And under his outstanding leadership another sub-atomic particle, neutron, was discovered later. For these reasons, Rutherford was given the title of ‘Father of Nuclear Physics’. He sought the honor to be buried next to Sir Isaac Newton after his death.

Rutherford was born on 30th August 1871 at Brightwater; the colony of New Zealand. His father James Rutherford was a farmer and his mother was Martha Thompson. He received his basic education from Havelock School and then Nelson College. Being a bright student, he won the scholarship to study at Canterbury College, University of New Zealand. There he joined the debating society and played Rugby.

With degrees like B.A, M.A, B.Sc and two year’s research work, he designed a new form of a radio receiver. Moreover, his radio receiver was able to receive signals up to half a mile away. His invention of radio receiver happened before the Marconi’s long-distance radio communication. In 1895, he earned 1851 Research Fellowship at Cambridge under J. J. Thompson – known for the discovery of the electron. Rutherford was the first non-Cambridge student to have earned this scholarship among the other nuclear scientists and engineers.

In 1898, he became a professor at McGill University, Montreal, Canada. By 1901. After then, he obtained a doctorate and in 1907 became a professor at Victoria University, Manchester. In the same year, he also proved that alpha radiations are helium nuclei. After 10 years, he became the director of Cavendish Laboratory at the University of Cambridge. And later under him, James Chadwick successfully discovered another sub-atomic particle called neutron in 1932. Rutherford died on 19 October 1937 at Cambridge, England.

Rutherford’s additions to nuclear physics are beyond comparison. Today nuclear engineering’s vital importance can be seen in the form of electricity and nuclear weapons. The most important contributions of Rutherford are: