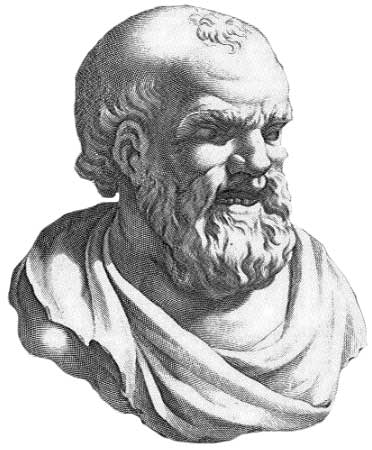 Democritus is a well-known pre-Socratic Greek philosopher – who came before Socrates. He is a very famous Greek philosopher due to the discovery of the atomic theory. The research he did on atoms makes him more likely a scientist than a philosopher. Therefore, he was given the title of father of modern science. Due to his smiling nature and making fun of others’ mistakes, he is also known as the laughing philosopher.

Democritus was born in Abdera, a local government of Thrace, Greece in 460 BC. He acquired most of the education on his own. His father’s name appears varying in historic records, who was a nobleman and possessed a vast portion of land. Democritus was young when his father died and left him a huge inheritance.

For higher education, he left Thrace and traveled to Ethiopia, Egypt, and India. During his stay in Egypt for five years, he learned geometry and visited the Red Sea as well. He appreciated Egyptian mathematicians back in Greece. In addition to it, he wrote on Babylonia and Meroe states while in Egypt. He explained the cultures and civilization of these two states of Mesopotamia – currently known as Iraq.

Further, he came interacted with many notable philosophers of his time during his travel. After returning to Greece, he traveled the entire country to study its diverse cultures. Historic records show that Democritus was not interested in worldly pleasures and material gains. Rather, he was more focused on gaining knowledge as much as possible. He worked on ethics, astronomy, philosophy, mathematics, and politics.

Democritus is known to have written 70 books that couldn’t survive long enough. Even historians suggest that Plato, the Greek philosopher, who came after him didn’t like his ideas and had his books burned. He died at the age of 90 years in 370 BC in Greece.

The foundation works of science and philosophy trackback to Democritus. His unending thirst for knowledge helped him discover mathematical concepts and contribute to other subjects widely studied and researched during his time.