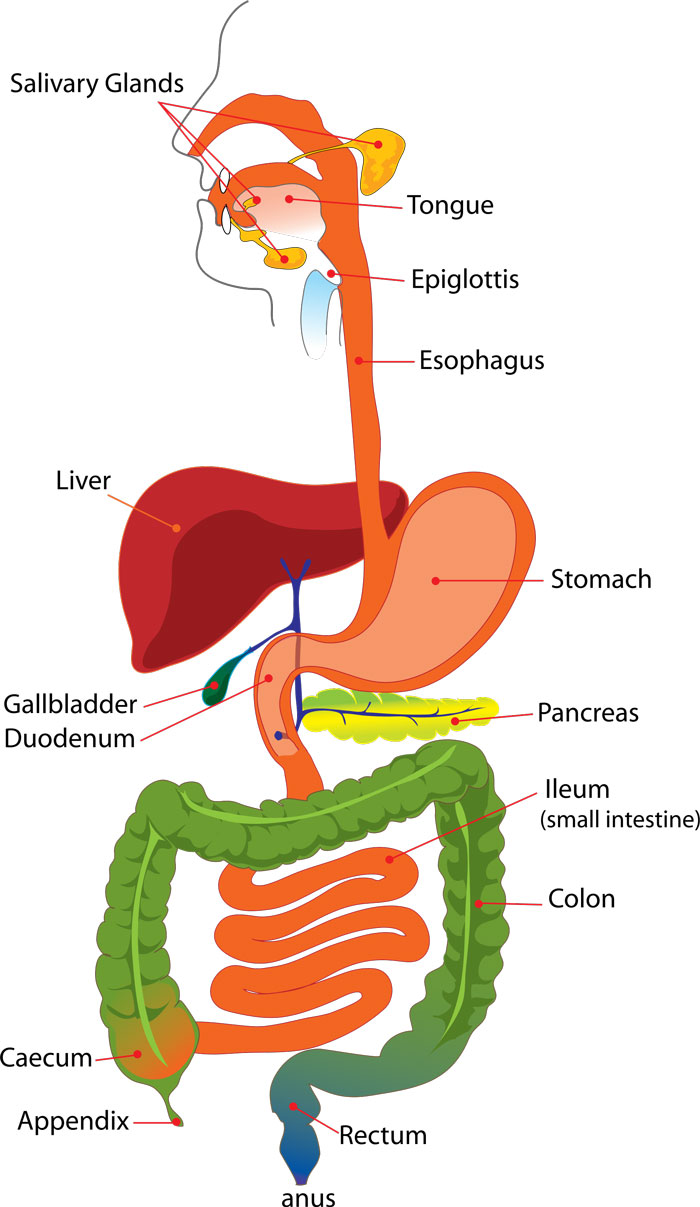 We require energy to perform physical and mental activities. We get the energy and necessary minerals and vitamins – for proper functioning – from food that we eat. When we eat food, it is the job of the digestive system to process this food and breakdown the food into chemicals that our body can use.

Parts of the Digestive System

Our digestive system doesn’t process the food in a single shot. Instead, it processes the food in various stages that start from eating food from the mouth and ends at defecation (discharge of water matter). The stages are chewing, swallowing, stomach stage, small intestine stage, and large intestine stage. Let’s discuss these stages in detail.

Chewing – It is the first stage of digestion in which the eaten food is chewed to break it down into smaller pieces. Smaller pieces allow easier swallowing and help in processing food in the stomach. Chewing also mixes the food with saliva which contains enzymes that helps in breaking starchy food.

Swallowing – Swallowing of food may seem a simple process but it more than that. When the food is broken down sufficiently in the mouth, then it is pushed to the back of our throat with the help of the tongue. After which, the food goes down through a tube called esophagus with the help of three muscles in the throat. Before the food goes into the stomach, throat muscles have to block windpipe – through which we breathe – with a flap called epiglottis so that food doesn’t go into the windpipe. After this, the food goes directly into the stomach.

Stomach Stage – When the food reaches the stomach, it stays there for a few hours for processing. The stomach adds many enzymes and acids in the food to breakdown the food further. During food breakdown, many types of harmful bacteria are killed that can make us sick.

Small Intestine Stage – There are two parts of the small intestine which works in series. The first part mixes the food – received from the stomach – with juices obtained from pancreas and liver. These juices further breakdown the food. After this, the food goes into the second part where it is absorbed into the blood.