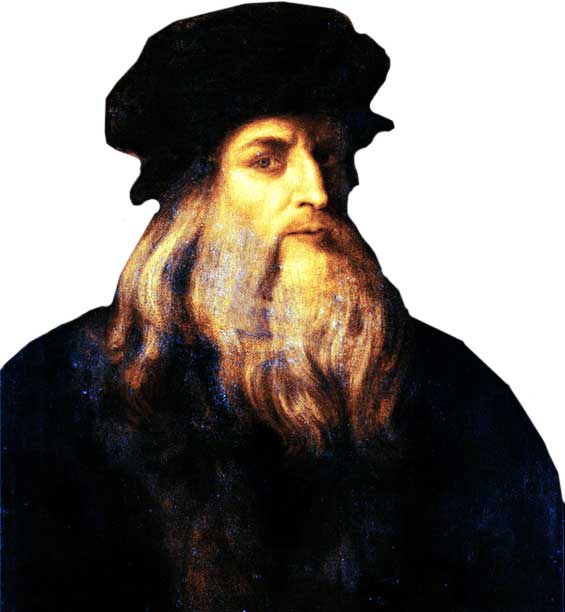 Leonardo da Vinci is the most admired and genius scholar of the west. He was basically a good painter. His famous paintings of the Mona Lisa and the Last Supper talks about his sharp imaginations.

His works were hardly paid attention by scientists of his time. But years and centuries later, when his works proved to be true and scientifically valid, they were given a significant value. He wondered to know deeply everything around him. For that, he started to work on dead bodies of human beings, animals and birds. He also worked on scientific instruments that helped him in measuring water density, air pressure, and many other quantities.

From the work on birds, he derived the concept of flying. Da Vinci’s scientific skills led him to become Chief General Engineer in the Italian military.

Due to his vast work on deposits of the earth like fossils, he was called the ‘father of paleontology and architecture’. The paleontology is the branch of science that deals with the study of fossils. Fossils are the forms of dead animals and plants that are converted into resources under the earth or sea.

Leonardo da Vinci was born on 14th April 1452 at Vinci, Republic of Florence, Italy. He has quite a longer full name which is “Leonardo di ser Piero da Vinci”. His father, Piero di Antonio da Vinci, was a public official for civil law and his mother was Caterina di, Meo Lippi. Historians write that Leonardo was born before the marriage of his parents.

He spent his early years with his mother in small-town Anchiano until 1457. He then moved to live with his father. He received his formal education in Latin, geometry, and mathematics. Leonardo moved from Vinci to Florence with his father in 1466.

In Florence, Leonardo joined the studio of Andrea Del Verrocchio.  He was a well-known Florentine painter and sculptor. He offered Leonardo many new concepts and developed technical skills in him. Leonardo gained training in woodwork, plaster, drafting, metals’ study, leather, chemistry, and a few others.

By the age of 20 in the year 1472, he became a member of a group of people who were experts at art and medicine. This group was called ‘Guild of Saint Luke’. His work of 1473, pen-and-ink drawing, gave the idea to make Arno River – a channel connecting Florence and Pisa.

From 1478, he began to work on projects offered to him by the king or church. He moved to Milan in 1482 from Florence and worked there until 1499. It was during this period when he painted his world-famous painting of the Mona Lisa and the Last Supper.

By 1500, the Second Italian War broke out. He ran away to Venice. There he was taken in the military as an architect (a person who designs maps of buildings) and an engineer to defend the city from attacks of the foreign navy.

In 1502, Leonardo was made Chief General Engineer by the ruler. To win the ruler over the country, he needed maps. But back then, there were very rare maps. So Leonardo traveled and created a new map in order to make sure that water remained available in all seasons. For this, he designed and built a dam. It connected Florence to the sea. Thus, the water shortage was never a worry.

By 1508, Leonardo returned to home after the death of his father. There he demanded his share of the property left by his father. Then, he went to Rome on the orders of the pope for paintings. After completing paintings and statues, he returned back to his home.

In 1515, King Francis-I came to power and got control of Milan. He asked Leonardo to draw a map for castle town. Having seen his excellent work, Francis-I awarded him home in Milan. Leonardo died due to a heart attack on 2nd May 1519.

The unmatched works and talent of Leonardo brought him high popularity in the whole World. He is recognized as a brilliant painter, inventor, and scientist. He gave out-of-the-box ideas that left one to wonder.

Leonardo da Vinci’s contributions were not given sufficient value in his lifetime, but they proved to be an eye-opener for generations to come centuries later. His notable inventions and works that introduced new concepts and were unknown, earned him huge fame.

His following works may be counted as his great contributions and discoveries:

In the field of medical science, Leonardo worked on dead bodies of humans. He cut them open and studied carefully every bone, vein, and part inside them. He drew images of internal parts like muscle and bone and explained their working.

Moreover, he studied heart for a long time through his careful examinations. He also made a dummy heart from wax for experimental purposes. He filled the dummy heart with water and figured out how valves opened and closed to let the water flow in and out and learned about working of real heart. Also, his findings showed that heart veins get blocked over time.

He wrote notes over 35000 words called codex on the flight of birds. The codex contains more than 500 sketches of birds that he cut open to observe them. Furthermore, he mentioned about air pressure, gravity, wing design, and a flying machine. Leonardo’s interest in human flight led him to invent parachute.